For nearly two decades, an assortment of spunky heroines have decorated the streets of Paris and across France, brought to life by renowned graffiti artist Fafi.

While she started guerilla style, painting her detailed, exaggerated, and undeniably femme portraits of cartoon girls on walls across her hometown of Toulouse, she’s long since crossed over to brand collaborations and mural commissions.

Her work has brought her around the globe and back again. This year alone, her itinerary has lead her to Long Beach, where two of her Faninettes scale the side of a building in the southern California town, staged as part of the weeklong POW! WOW! festival of murals. In late spring she ventured into the middle of the Pacific Ocean for a “spraycation” on the island of Guam along with a group of fellow graffiti artists. And eventually she’d take up a brief residence in Biarritz, a picturesque resort town in the south of France, for the annual Colorama street art festival.

Over the years, Fafi’s approach to how she depicts her iconic Fafinettes has changed, as has her relationship to her past work. While they’ve always been a beacon of femininity, they’ve gotten more badass over time, growing in depth as she’s gotten older. “At the beginning, they were only sexy” she says of her early work, admitting that most people thought it was a man behind the creations. She received a lot of pushback from fellow women critical of the message they were sending, which was frustrating at the time, but something she understood nonetheless. Now instead of aiming to provoke fellow graffiti artists, the primary audience she aims to reach and empower is women. “I want to give direct to girls instead of seducing boys,” she says, in summation of her mission.

We meet in France as she’s turning the walls of a long dormant garage next to Le Régina hotel into her latest canvas. Containers of paint in various shades of purple dot her work area, ready to add color to the wall and fill in the outline of a girl with a missing heart. Though Fafi will spend several days painting alongside fellow artists who are working on their own segments in the same space, the building will be demolished following the festival. 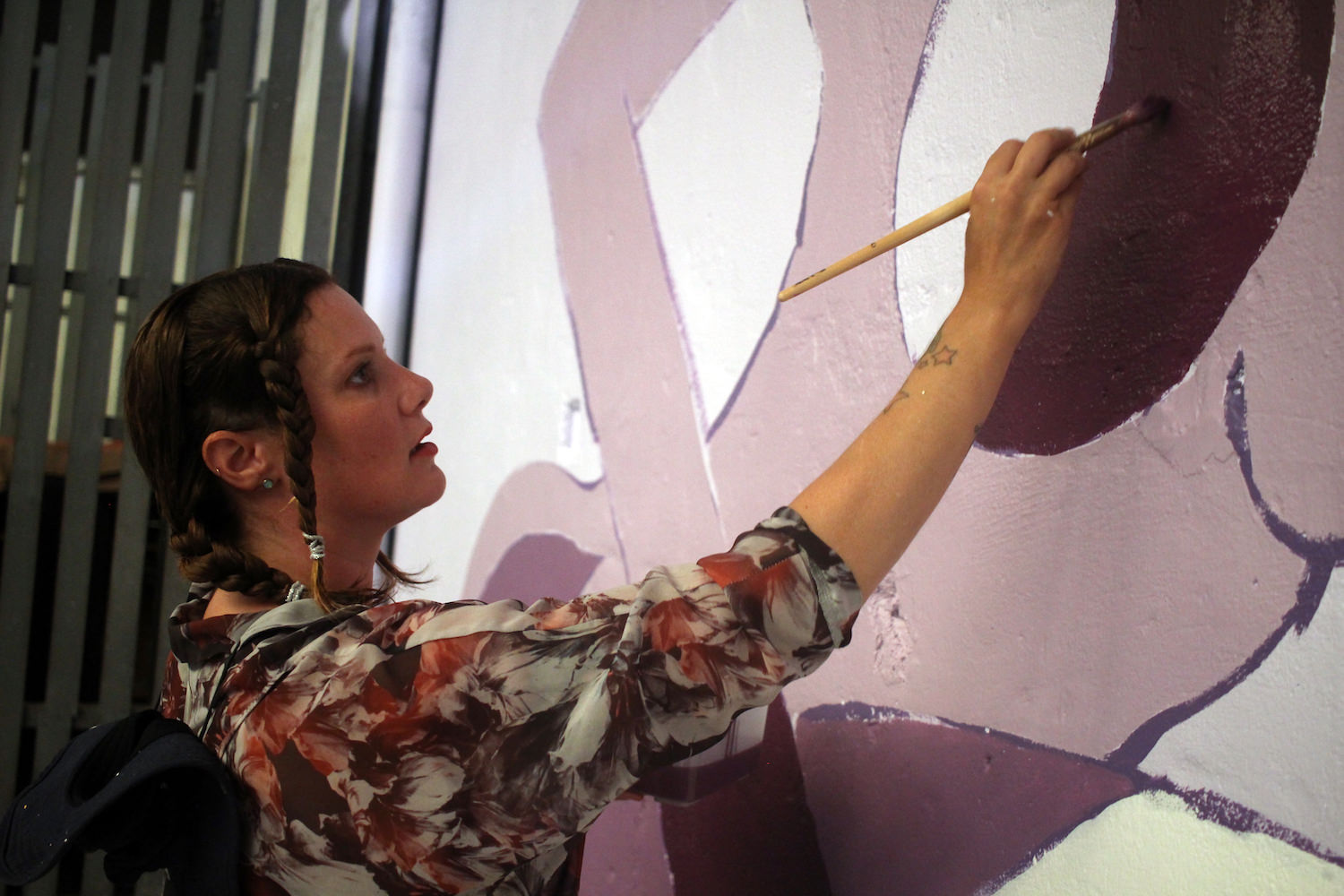 With that in mind, we sat down to talk about embracing impermanence, creating a livelihood out of painting, the uncertainty of a career in art along with balancing motherhood, and the continued reward of sharing art with the masses. We also delved into how her work has changed over the course of her career and her ambitions ahead.

To start, you mentioned that this is going to become lofts in September. You also said part of the beauty is that it’s ephemeral, how stuff can just go. What is it like to spend so much time creating art that may just go away so soon?

I have more sympathy for the boys that take care of the whole metal thing, all the really hard work they do rather than mine, because I will only be painting for three and a half days. Also, the impermanent notion of my art is something I had to deal with from the start. And it has now been 25 years since I started painting, so I’m used to it.

Three paintings before this one, I was painting in Le Marais in Paris and I really spent a lot of time on the painting, on the wall. And today when I came back, a writer had put a huge Fat Cap spray on the face. So this is the game. If you don’t want the wall to be destroyed, if you don’t want your painting to be toyed with or people to interact with it, you just stay in your studio and paint privately. This is part of it, I love it actually. 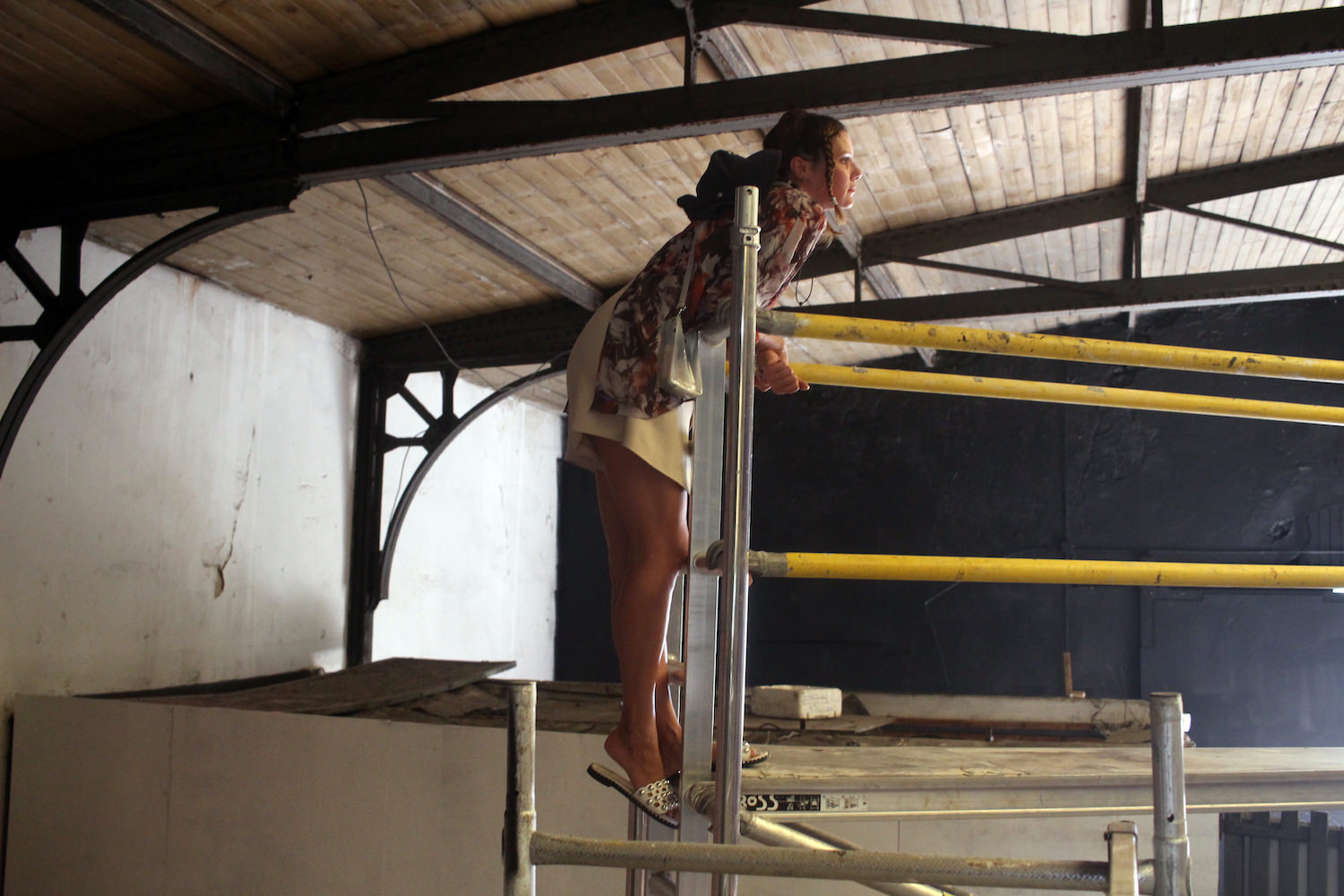 What drives you to do public art?

I had this conversation with a girlfriend of mine that was been harassed in the street by a man a few days ago. I told her that when I started painting I wanted to put a feminine image in the street for girls when they were alone. It was kind of a point where you could feel comfortable with a feminine dot, you know?

Looking at your work, especially this very involved work, what do you see as the importance of it now? In terms of the audience and who’s receiving it, what messages are you giving?

Actually I don’t conceptualize this. But I have to break my ass to give something; I cannot be easy with it.

People tell me, ‘Oh when I was 15, I looked at your drawings when I was depressed and it gave me power.’ That’s the thing. But also I want to bring people to another galaxy. I’m not interested in reality; I want to take the viewer somewhere.

My dream would be to do an immersive exhibition, with smells and everything, You would travel in a little boat to different worlds. That would be great. And eat this crazy food that doesn’t exist here. 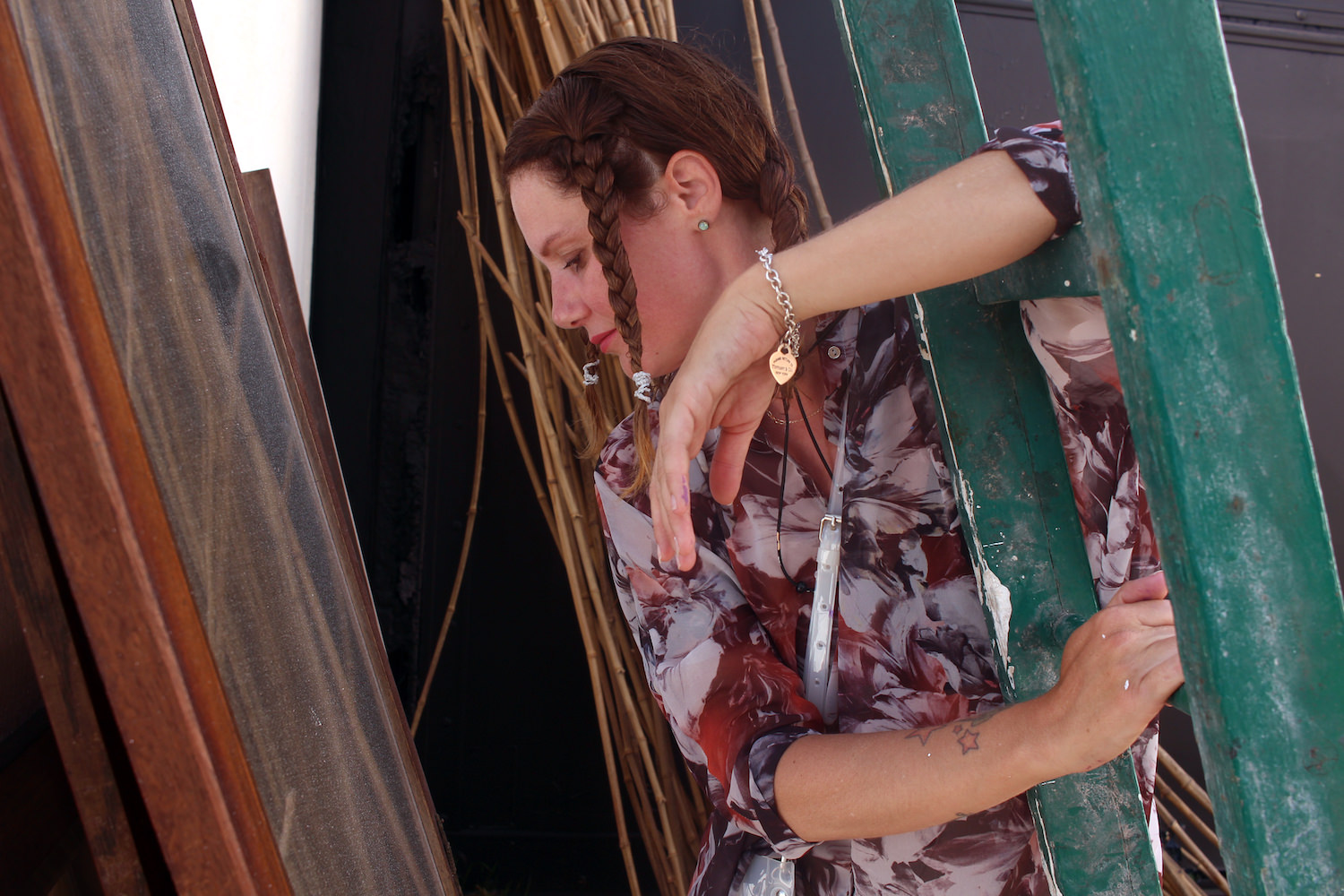 What is it like being a working mom? First of all, you’re a creative person, but your work has you traveling quite a bit. Is it hard to balance? And what tricks do you have for that?

I have help from my parents, Medhi’s mom also, but sometimes there’s no money. Sometime in two or three years I might have a lot of money, but it’s the life I chose. I know it’s the life I chose, and it’s part of the game, but it’s fucking difficult. My son is going to be 13 and I raise him alone. Honestly, he’s the cutest boy you can meet, he’s fun and we have the best time together. Now I have the feeling I can take my artistic life back because he can manage himself a little bit, it’s the start. During a few of the years, raising him alone and hustling to be a good artist, it was very difficult. But I feel now that the window is open.

The biggest challenge is to understand that your career is not over. At some point that’s going to happen, especially when you’ve been doing this for 20 years. Two or three years ago, it was like, people don’t like what I do anymore, maybe I need to change jobs. It was very challenging. I felt like nobody liked me. 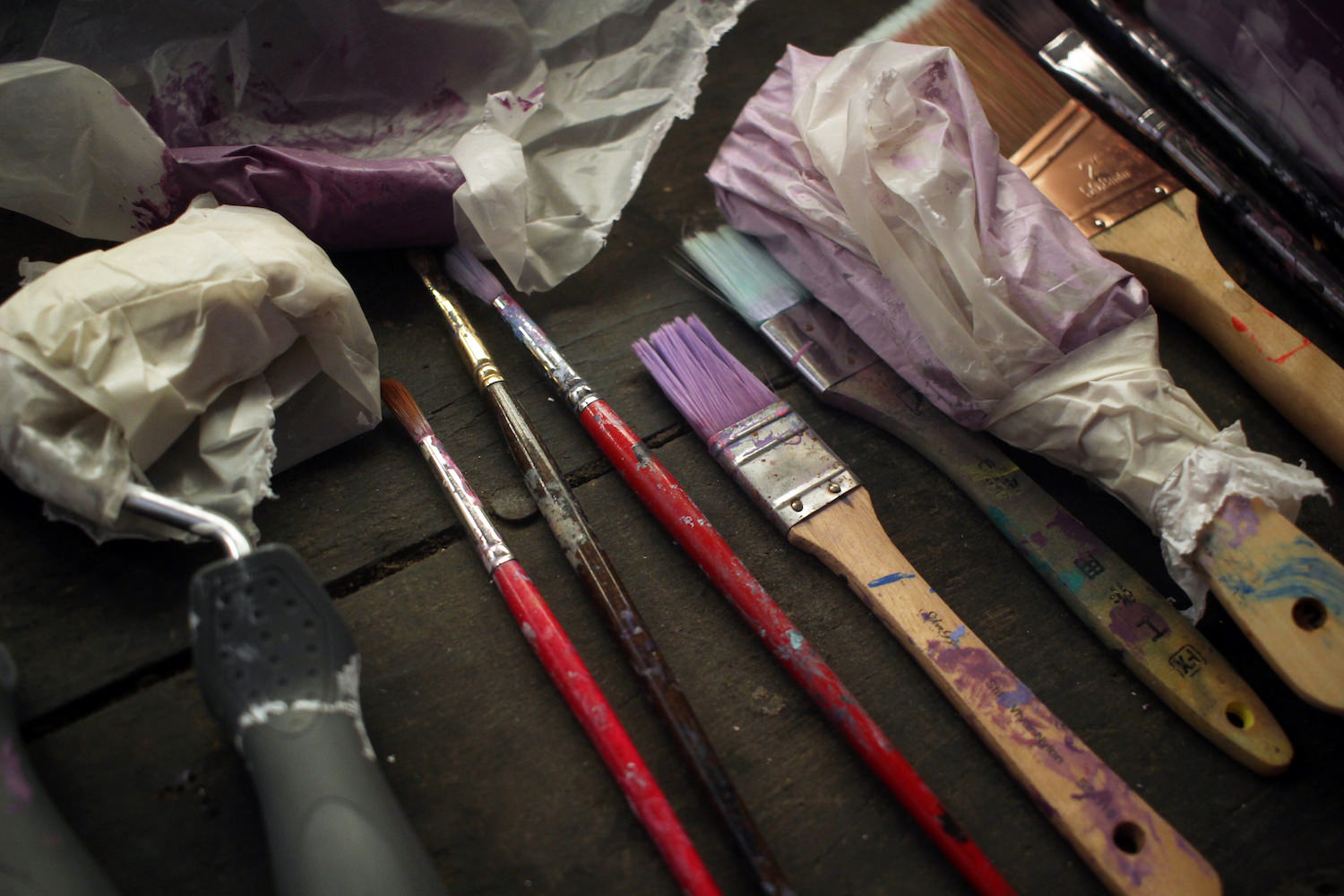 What did you have in mind for a career change?

I have a restaurant. We’re going to open a second one.

Really?! I didn’t know this!

It’s in Paris, I have it with a friend. It’s called Miss Bahn Mi, and we do only bahn mi, and it’s at Les Halles next to Rue Montorgueil, and we’re going to open a second location because it works really well. I was a waitress when I was young. I always had a lot of ideas. So we made it and it’s working really well.

Thinking of the most rewarding aspects of your career overall, what comes to mind? 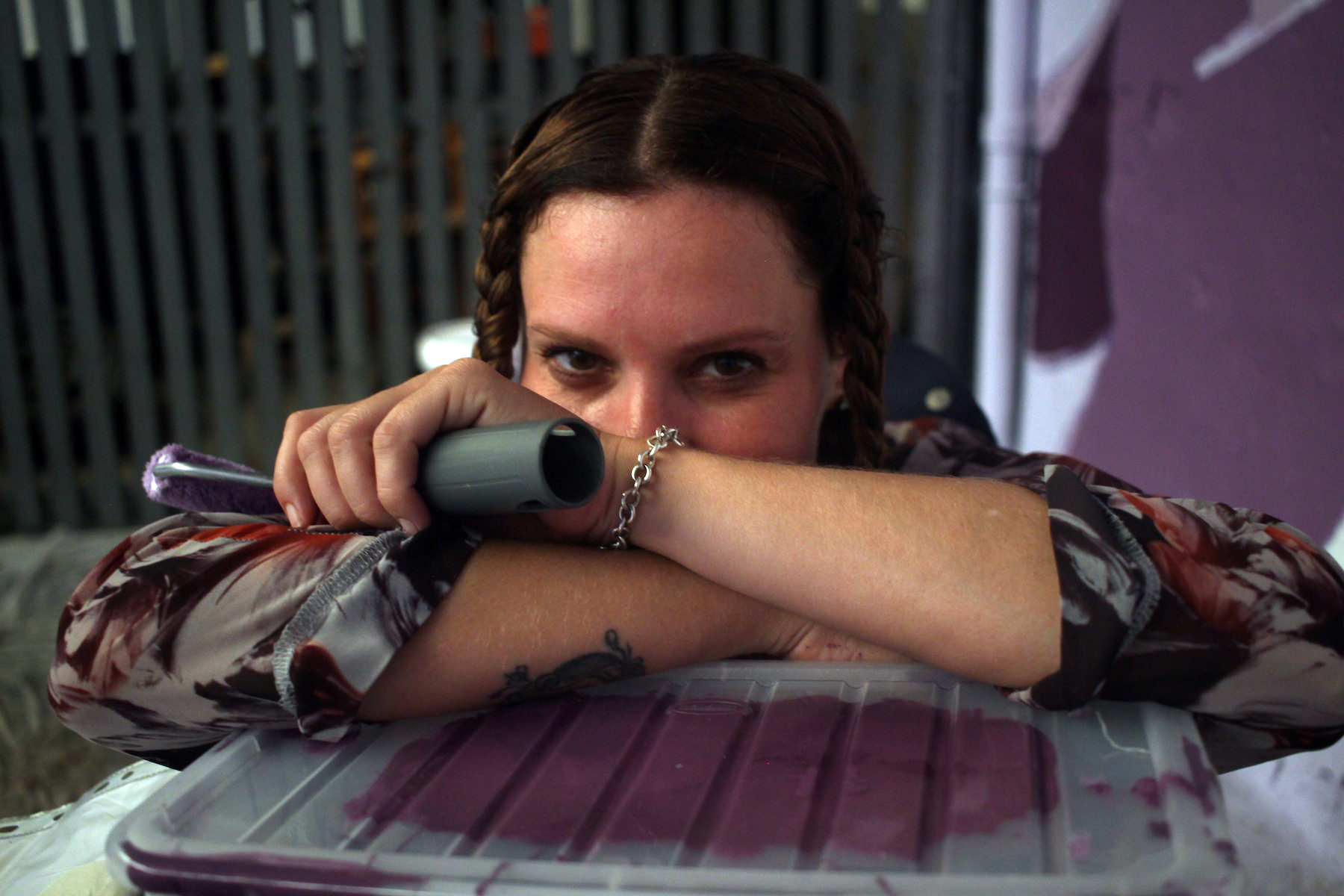 Creating free art, how important is that to you? Something I had in mind, in terms of freelance writing, people will ask you to write for free, they’ll say it gives you exposure. There’s all these blogs that are “for exposure.” For me, I don’t often write for free, but occasionally I will if I love who it’s for. But I feel often I’m in the minority, so many people say not to do anything for free. You continue to do art that’s available for free - do you view it as giving back, or is it just what’s inspiring for you?

First off it’s for my own pleasure. Also when you paint in the street, maybe you meet people that know you, but most of the time you start from zero. In the street you meet all ages, all genders, kids. It’s like you’re 18 again.

Get your very own Fafi piece to add to your collection from her Big Cartel shop.

Nilina splits her time between Los Angeles and her hometown of Portland, Oregon. She loves crafts, adventures, storytelling, photo-taking, DJing, and more.