By day, Anthony Colangelo develops the Big Cartel for iOS app, programming features that allow store owners to conveniently sell work right from their iPhones and iPads. By night, chances are the 28-year-old is geeking out about space. 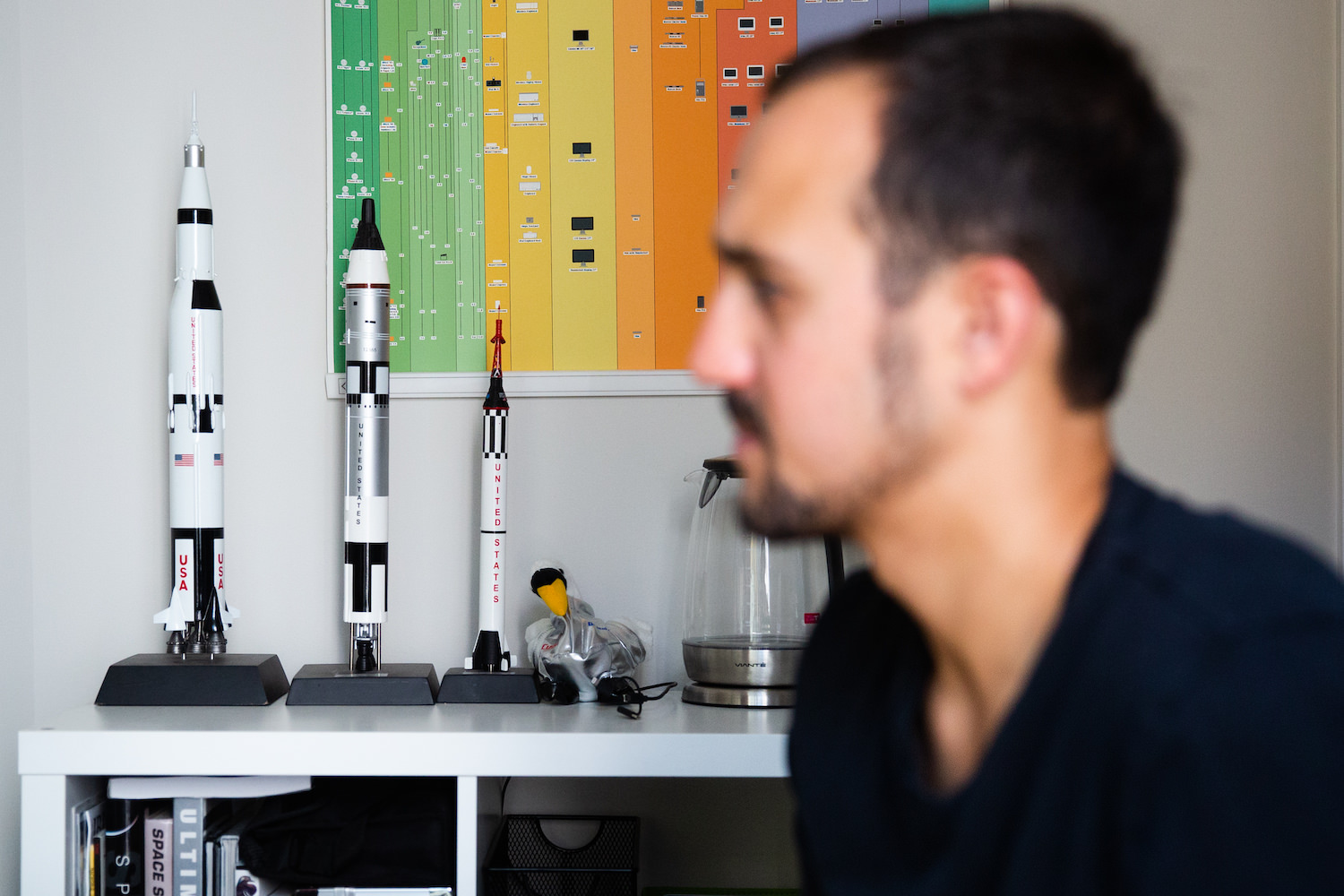 His enthusiasm takes many forms, from his space-themed blog and podcast, equipped with its very own rocket socks merchandise, to the newest app he developed, which broadcasts real-time satellite imagery of the earth onto your desktop. In 2016, as a recipient of Big Cartel’s Employee Art Grant, Anthony learned to 3-D model and print a controller for Kerbal Space Program, a video game he’s obsessed with that simulates space flight.

In total, the controller took 81 hours to print. 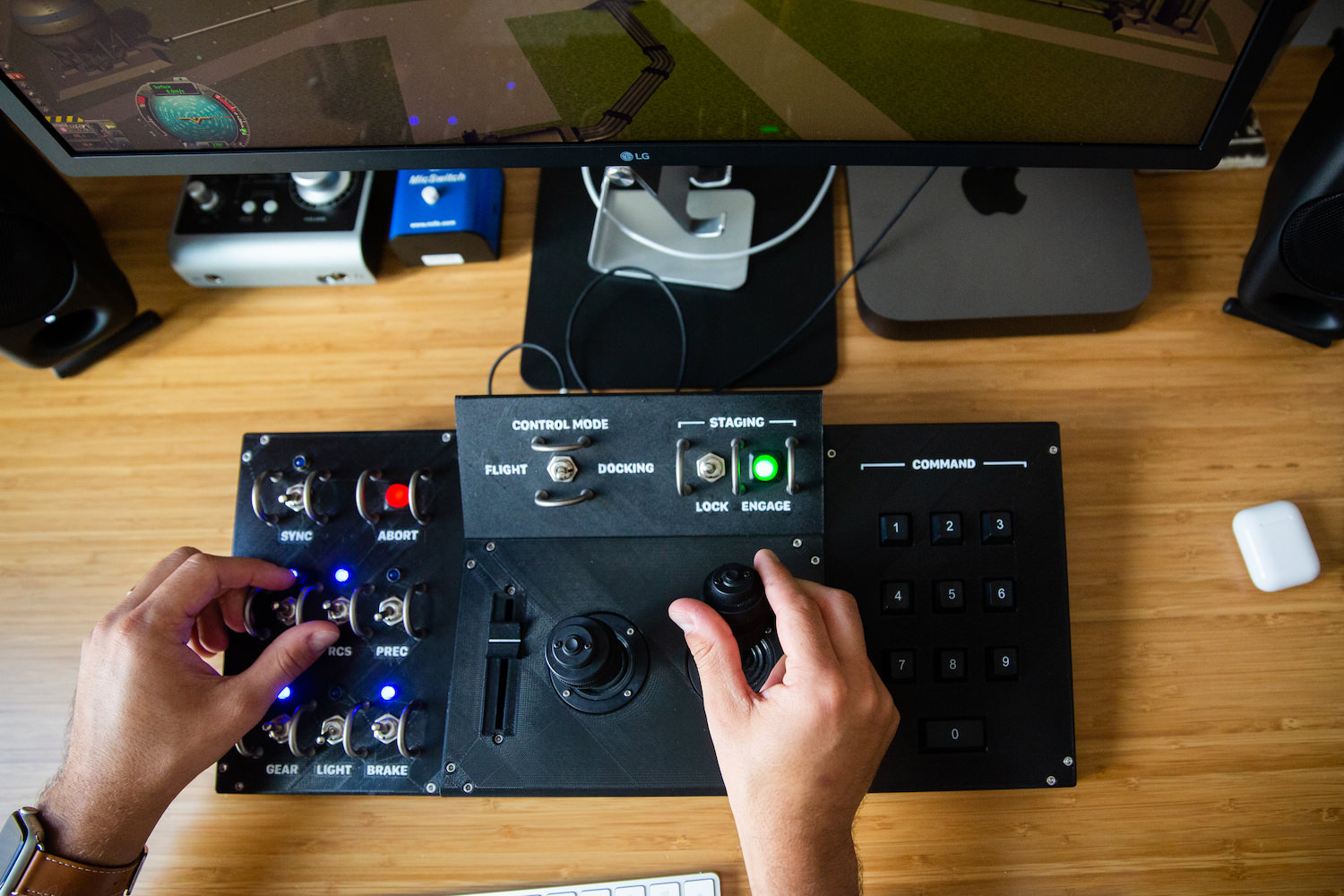 The journey to becoming a self-proclaimed “space nerd” begins at the National Air and Space Museum in Washington, D.C. Anthony was six when he visited for the first time, accompanied by his father, an aviation enthusiast who often travelled from Philadelphia to D.C. for work. Anthony recalls pressing his face into the aircraft windows and peering, transfixed, at the control panels and buttons. He marveled at the size of the rockets, which seemed like city buses that could somehow take flight, transcending the limitations of the earth.

Mostly, he felt how tiny he was. “You could drop me off [at the museum] and pick me up a week later,” he says, “and I’d still be walking around.”

But it wasn’t until witnessing his first rocket launch during his freshman year in college that his space obsession really… took off. He was 18 when he drove the 40-minutes from his college campus in Orlando to Cape Canaveral, in a region known as Space Coast. It was his father’s birthday, and he’d flown down from Philadelphia to celebrate the occasion. 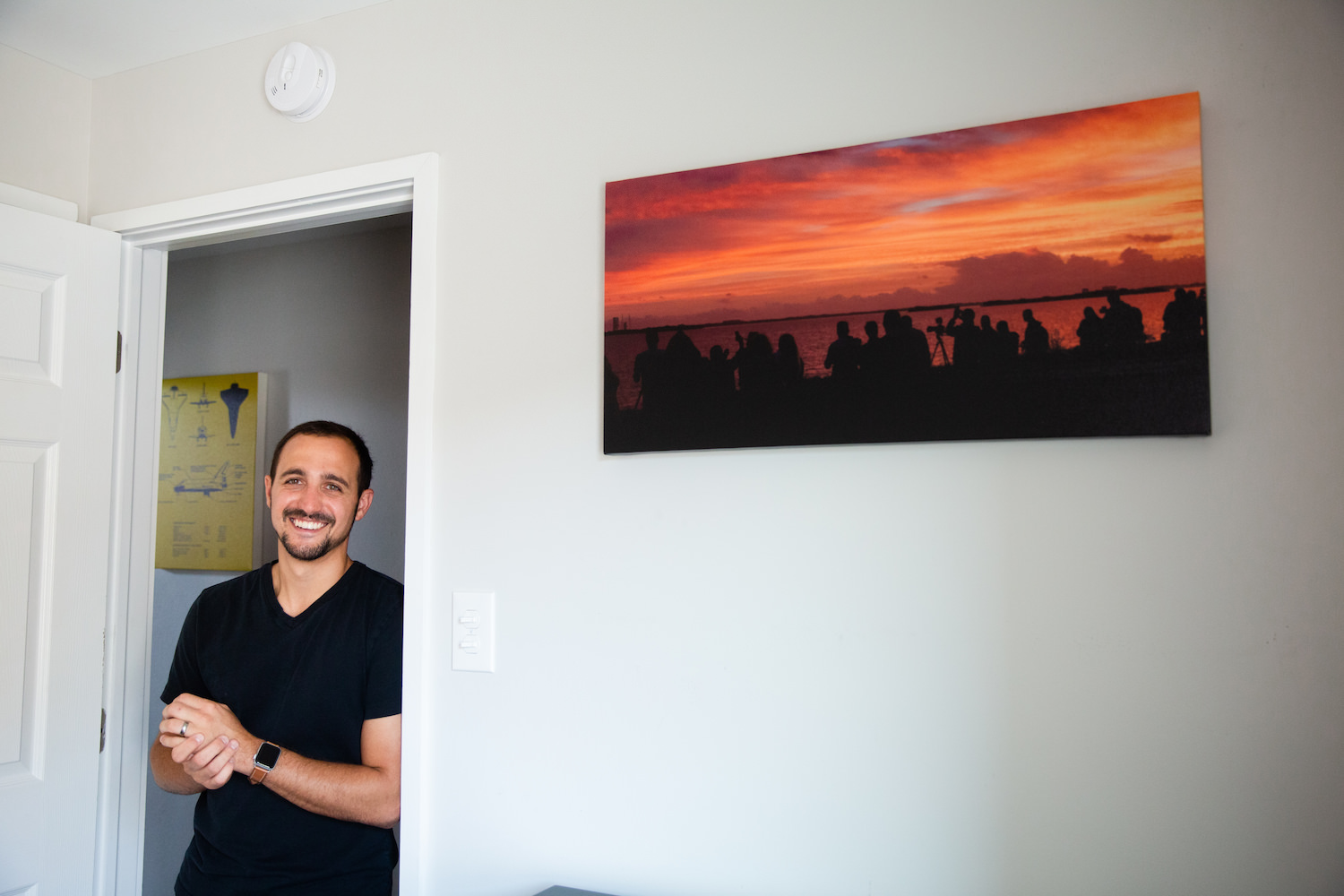 Nestled in the remote beaches and tranquil swamplands of Florida, Anthony felt the grand convergence of nature and human achievement in his bones. He describes the sensation as “visceral,” a surreal engagement of all five senses. Shuttle launches in particular “rumbled the ground,” he says. “You really feel it through your entire body. You feel it through your feet on the ground. You feel it in your chest. If you’re seeing a night launch it looks like the sun’s rising. It’s so bright it lights up the entire area around you. So you’ve got the rumbling, you’ve got the sound, you’ve got something so bright you can’t even understand it plus you’re out in nature so it’s such a - it’s probably the closest you’re going to get to doing hallucinogenics without actually doing hallucinogenics.”

Over the course of his two years at Full Sail University, where he studied web design, Anthony witnessed eight shuttle launches. He particularly cherishes the last, when he dragged a bunch of friends to Kennedy Space Center at 7 a.m. They had just pulled an all-nighter finishing a group thesis project. At every launch, he recalls seeing at least one bystander in tears. “It’s overwhelming,” he says. “It’s one of those life experiences where you bond with people. It doesn’t make any sense but when you’re there it’s incredible.”

That feeling, coupled with the ascendance of boundary-pushing companies like Elon Musk’s SpaceX, urged Anthony to launch his recreational hobby to new heights. In 2016, he started Main Engine Cut Off, a blog and podcast that takes a policy-driven approach to spaceflight and exploration.

At first, he intended each episode to be under nine minutes long; Main Engine Cut-Off is a technical term for the point at which three engines shut off eight-and-a-half minutes after Space Shuttle launch. Instead, episodes eventually hovered around the 30-minute mark. 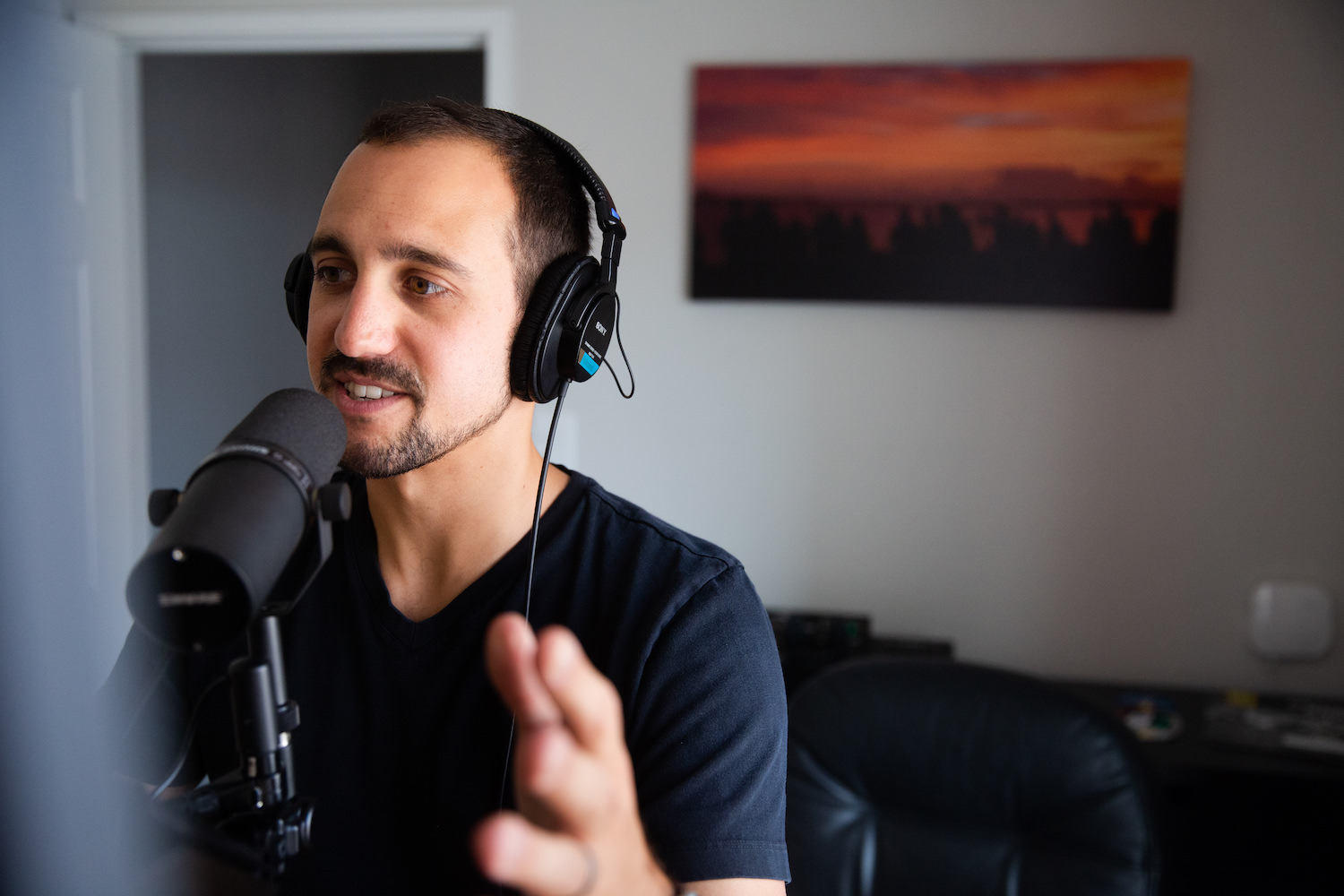 In this newfangled era, in which spaceflight and Silicon Valley have become increasingly intertwined, there’s a lot to talk about.

Many of his listeners, of which Anthony estimates between ten and twenty thousand, work for companies like NASA, Boeing, and SpaceX, and he receives funding through Patreon subscribers. He considers himself an independent media company rather than a journalist, though he often receives launch credentials and media passes. At events, his presence sometimes rankles the old guard, which can lead to “cranky interactions.” 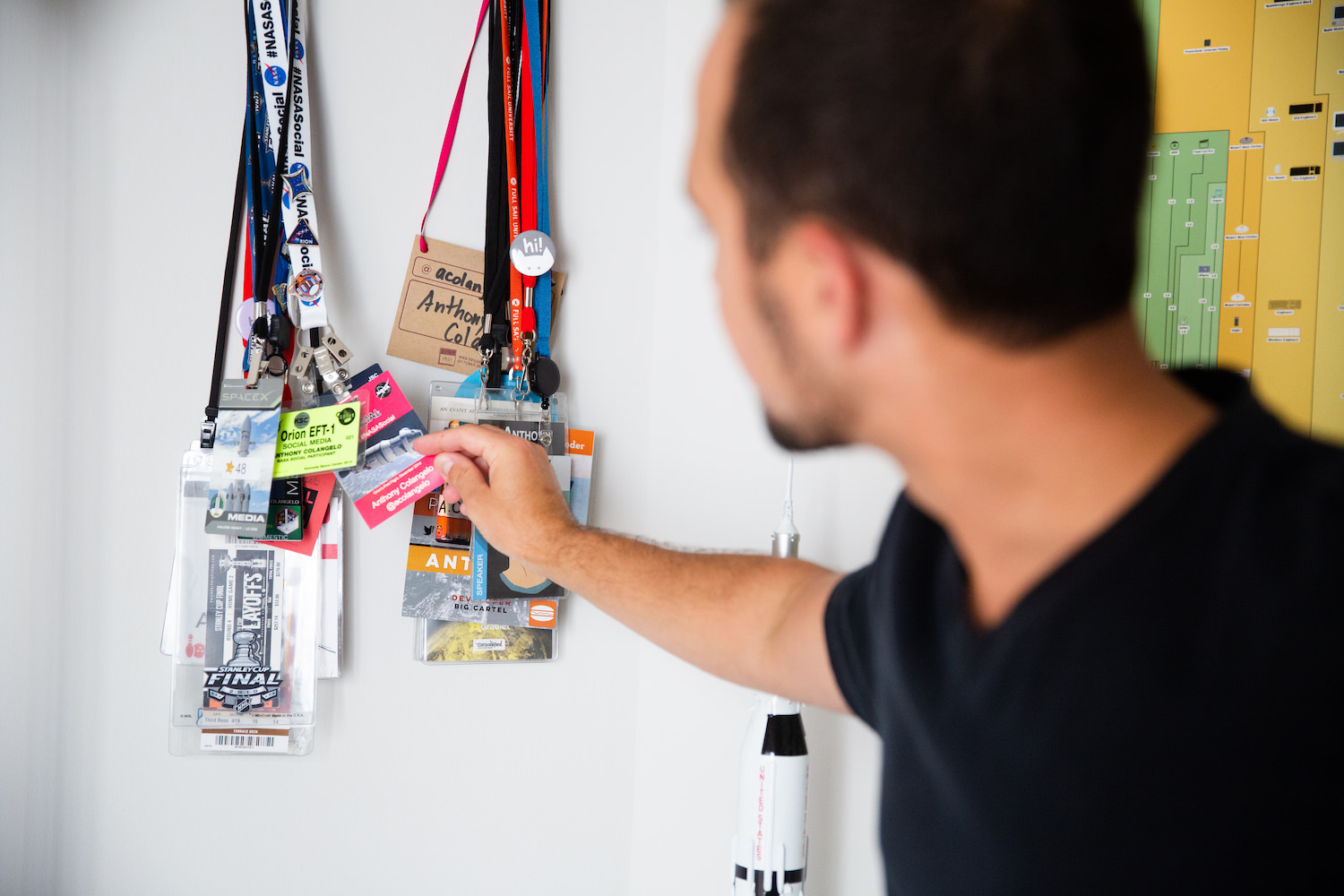 Anthony, who’s based in Philadelphia (“I love that I work in Philly but for a company in Salt Lake City, so I get to take four hour flights every couple of months and look out. I love love love sitting in the window seat.”), sees some parallels between his space obsession and his role at Big Cartel. “What the Apollo era was for the previous generation, for people my age the iPhone unveiling was that moment where you saw something that changed the way you think about technology,” he says.

But he’s quick to put his job into perspective. “My wife’s a doctor, so I’m also faced with the fact that the stuff I work on isn’t a life or death thing. At all. And when you get to [working in] space, it’s that next level up.” His objective as a developer is more down to earth: to make Big Cartel’s iPhone app as user-friendly and convenient as possible, which requires listening and responding to customer feedback. Lately, that’s meant programming a built-in point of sale system, making it even easier for small business owners to sell their products in person.

Space-wise, Anthony’s latest project is also an exercise in perspective. It’s called Downlink, an app that allows users to download satellite imagery of the earth onto their desktops. The images, which are powered in real-time by the National Oceanic and Atmospheric Administration (NOAA), updates every twenty minutes, and can be viewed from eight different angles. When it launched in May, Downlink was featured in the Mac App Store, attracting around thirty thousand installs within the first couple of weeks. 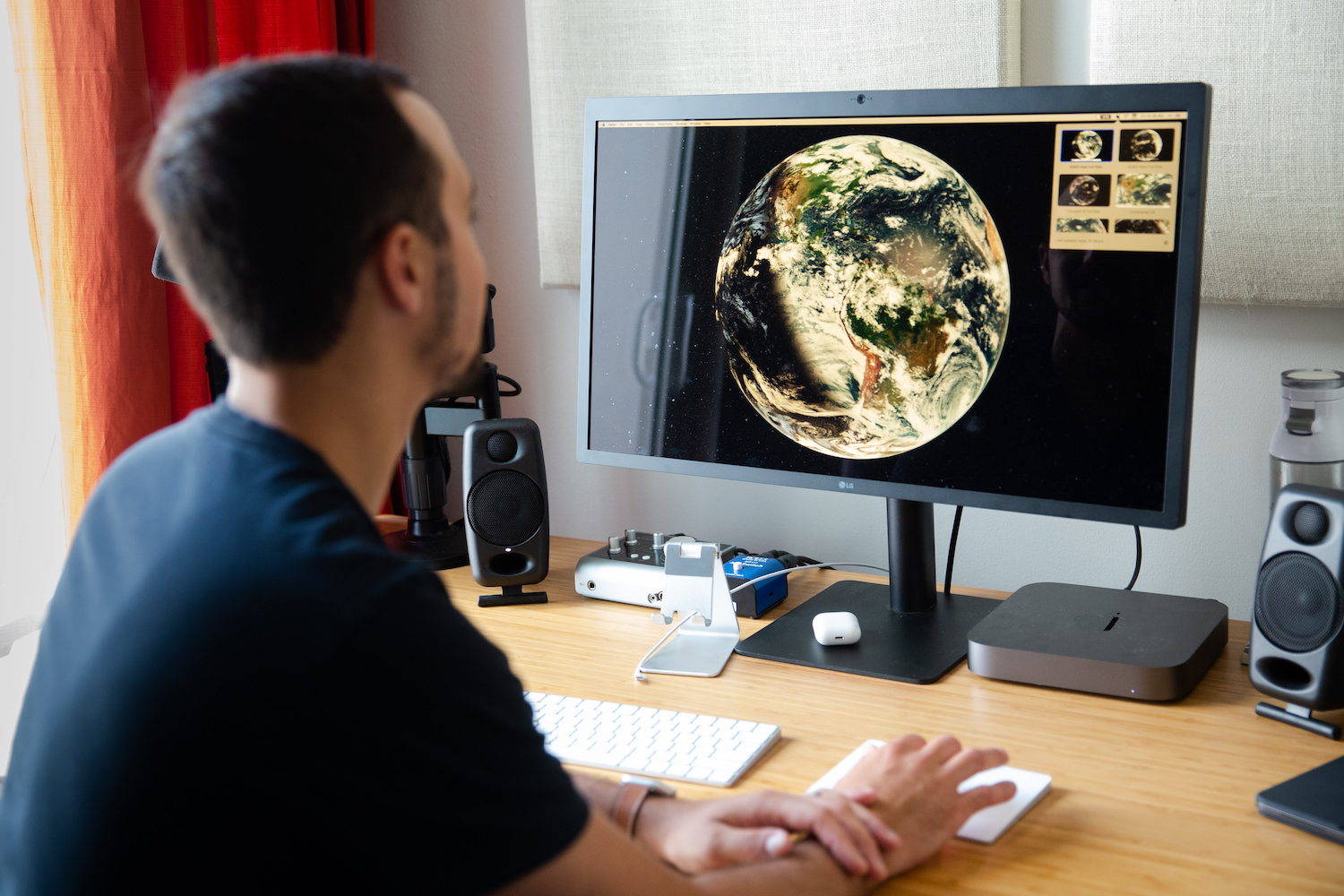 Anthony was inspired to bring awareness to NOAA’s weather satellites, which were newly updated to capture razor sharp images, and to dispel Flat-Earthers, a growing movement that contends the fact of earth’s roundness.

While working on Big Cartel’s app, he often has footage from NOAA’s satellites opened in another tab. “It’s relaxing to just look at the earth a little bit,” he says. “It definitely shifts your perspective when you’re struggling with a problem and you’re like Oh, there’s the whole earth. I’m just down there. That’s cool. I will be OK. It’s hard to not have a perspective shift about who you are, and where you fit into things.”

Freelance journalist in Hawai'i. His work has appeared in The New York Times Style Magazine, GQ, BuzzFeed News, Condé Nast Traveler, and Billboard. 2019 recipient of the Excellence in Online Journalism Award from NLGJA: The Association of LGBTQ Journalists

The Art of the Business Plan