The Bright and Bold World of Joan LeMay

Joan LeMay is a brilliant ray of light.

Her Twitter feed is a string of ringing endorsements of friends (and friends of friends) who are absolutely NAILING their comedy and music and art. She encourages strangers, too, through ALL CAPS affirmations. You are doing a great job, she cheers. And her rallying cry hits, somehow, exactly when we need it.

Offline, Joan is equally exhilarating. “I’m a Muppet of a person. I run towards my friends with zombie arms looking for a hug,” she says. “I love people so much.” 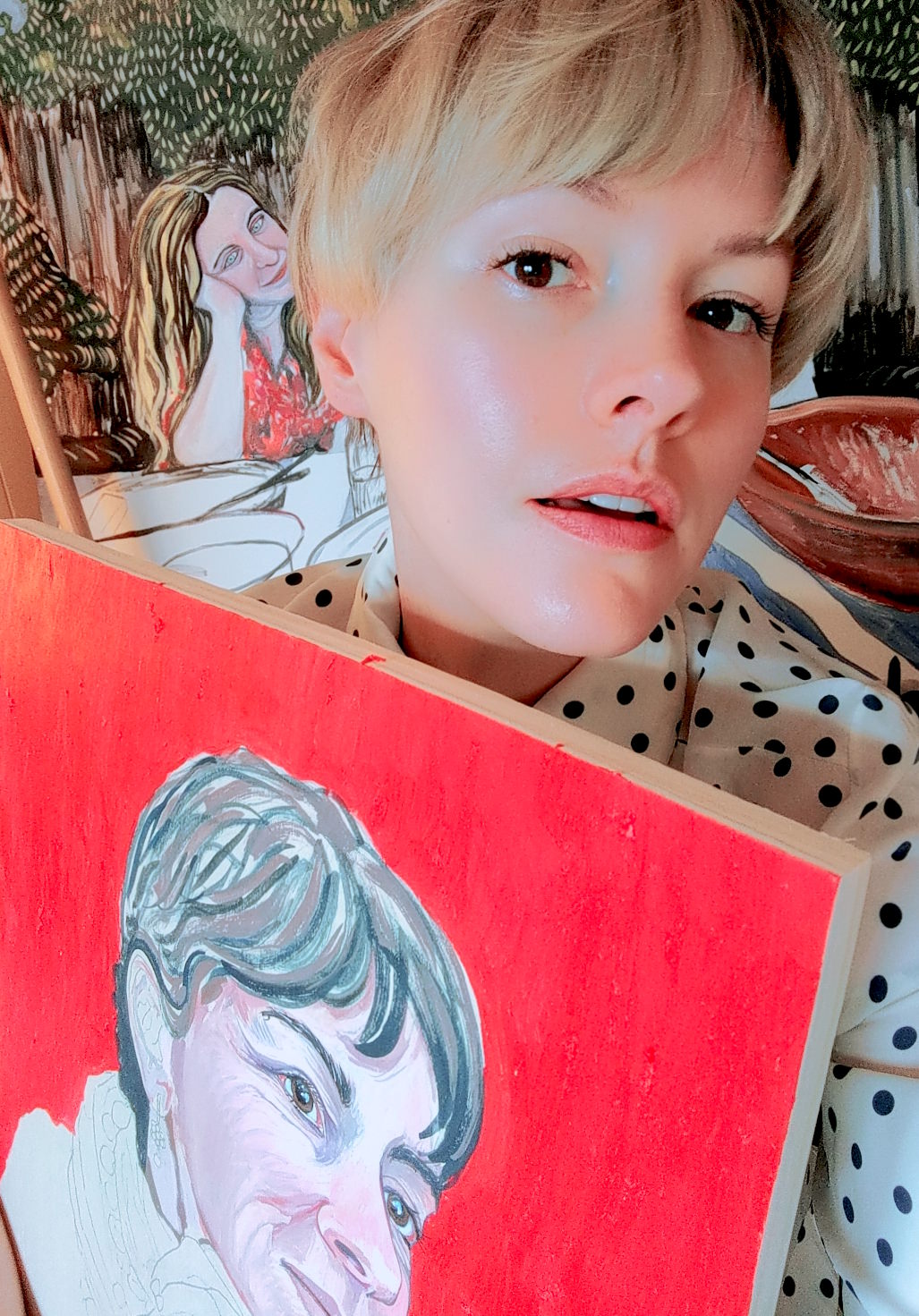 I met Joan a decade ago in Austin. Though we’d previously communicated by phone and email, I certainly didn’t expect to be greeted by a warm embrace and immediate invitation to share her tacos. Both of us worked in music - Joan, a publicist promoting bands; me, a journalist covering those bands. In a crowd of fake industry types, Joan was refreshingly genuine. She truly believed in her roster and definitely did a great job at PR.

I figured she’d do it forever, but I’m very glad she didn’t.

“I spent my whole life, which I don’t regret, getting the privilege and honor of yelling about other people’s work and art,” she says. “It was a really great fit for a long time. But I really wanted to do something creative myself,” which was difficult working on behalf of others all the time. “I didn’t have a lot of time or energy to devote to my own creative pursuits.”

Joan always made things, but only on the side. Fan zines. Editorial illustrations. Small gallery shows here and there. But today, she’s a full-time artist facing a growing demand for her electric paintings full of saturated colors and bold, patterned backgrounds.

Her visual language is fauvist, inspired by “Les Fauves,” or “wild beasts” - a group of artists who prized thick brushstrokes and vivid, “non-realistic,” depictions of their subjects. For example, she says, “You look at the image of a woman and it reads as a face, but the colors are green and purple and blue. You look at it and you accept that this woman is a rainbow. It’s more about the energy of the thing than it is about being photorealistic.”

Like a modern-day Matisse or Gaugain, Joan uses a super bright palate to translate her love of the figures she captures on canvas: people like Judge Judy, John Waters, Oprah, Elvis Costello, Dr. Ruth, Mr. Rogers, plus friends and their families. “My bread and butter has really been commissioned work, but I’m going to continue to scale way back and focus on doing stuff that 1,000% comes from my own head - and maybe will never sell,” she says. “It’s scary to allow yourself to make stuff and have no idea if anybody will like it or show it or buy it. But you have to do it.” 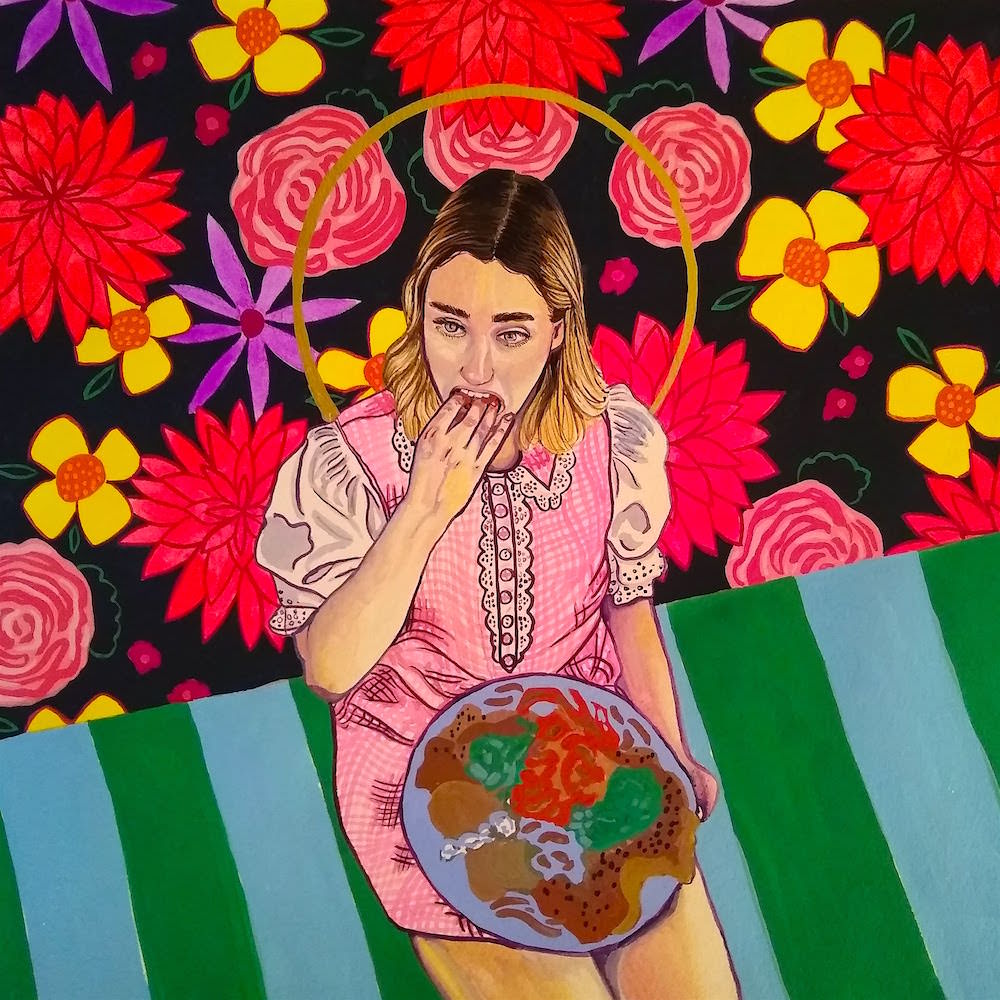 Joan admits it’s easier to pull the cord with a safety net. “I am in the fortunate position of being in a marriage with somebody whose work happens to be well compensated. I am in the very fortunate position of not having to really freak out about money. That is rare and it is something that is new to me,” she says, adding that her identity has always been tied to her ability to pay the bills. From her first street team gig as a punk rock kid in Texas to myriad service jobs to her PR career and post-PR interior design business, Joan is the definition of self-made.

So yes, it’s strange to earn what she pulled in at 27 (“enough to live on, barely”) and not stress about money.

But that leads to her first bit of advice for anyone who is making or wants to make art.

Joan urges anyone who wants to take the leap to full-time artist to be highly practical about the transition. “You should not go into it without having an idea about how you want to diversify your income streams.” she says. “Be creative about your time and resources - what are things you can have that can be ready for people to purchase without you having to sit down and create a whole new body of work? Grow those along with your organic art making process.”

It’s also important to stay as lean as possible for as long as possible. Joan used to tell musicians the same thing. “Manage yourself. Design your own website. Not only does this cut down on expenses, it helps you understand what it takes to promote and sell a product,” she says. “So, when you bring in someone to assist, you know what qualities to look for - and you know how hard their jobs are so you can be a good partner to them as an artist.”

As your own boss, you’re in charge of your schedule - and your pay stubs, taxes, rent, and new business development. For Joan, that means frequent check-ins with her Google Calendar and Google Docs, to stay current on Quickbooks, and to contact people who expressed interest in a painting but never followed through.

In terms of galleries, Joan has never had formal representation. And while she has a list of places she’d love to display her work, she knows that a big gallery show isn’t always what it’s cracked up to be.

“You’re making a deal with someone else - they’ll market you and advertise and bring in their own collectors. For those services you’re giving them 50% of the cost of your sales, but sometimes it turns out they didn’t run any ads or send emails to their list. You brought all the people to the show,” she says.

“So go to as many art shows as possible. Meet the gallerists. Be hyper-aware of what their policies are in terms of sales. What are they doing in exchange for their percentage? You want to work with whom you vibe.”

Ultimately, Joan is a practical optimist. Yes, there are lots of things to consider about “making it” as a person who makes things, but her biggest advice is, quite simply, don’t wait.

“It’s better to fail big, than to not try at all. If you have that thing inside you to paint or make music or whatever, if you don’t get it out it will eat at you and you will regret it,” she says. ‘You don’t get any younger. I’m 40 and I’m just getting started.”