When Sofia Lacin was fresh out of studying painting at UC Davis, a restaurant owner asked her to paint a mural on the wall of his burger and beer restaurant. She accepted, and asked long-time friend Hennessy Christophel, who’d studied art at UC Santa Cruz, to come paint it with her.

The result was a mural that both artists refuse to let me see a photo of, but I know it must be good because as they were painting, business owners from the same block walked by and commissioned murals for their own shops. The two artists painted their way down the whole block. By the end of it, they were muralists.

Today they’ve been public artists for 10 years, operating under the name LC Studio Tutto. Their art pieces, some painting and some sculptural, grace about 80 sites around California, including a 4 million gallon water tank (“Same Sun”) in Davis and 70,000 square feet of an I-5 overpass.

The sheer scale of Sofia and Hennessy’s work presents creative challenges: They use everything from brooms and pesticide sprayers to homemade, jerry-rigged tools to create what appear, on a giant wall, to be the brushstrokes of a giant.

And then there are the physical challenges: Wearing harnesses and hard hats, they use scissor lifts, scaffolding, boom lifts and swing stages to paint on walls up to 80 feet high. In blazing heat, they’ll paint in solar suits. In freezing cold, they’ll paint with hand warmers tucked in their clothing. For clients whose shops need to be open during the day, they’ll paint through the night. If they’re painting a ceiling, they’ll lie on their backs to paint for hours on end.

I recently visited Sofia and Hennessy at Dreamworks Animation where they were working on a pair of murals. We talked about their path, process and partnership. Hennessy’s 5-month-old baby, Fiona, was in attendance. 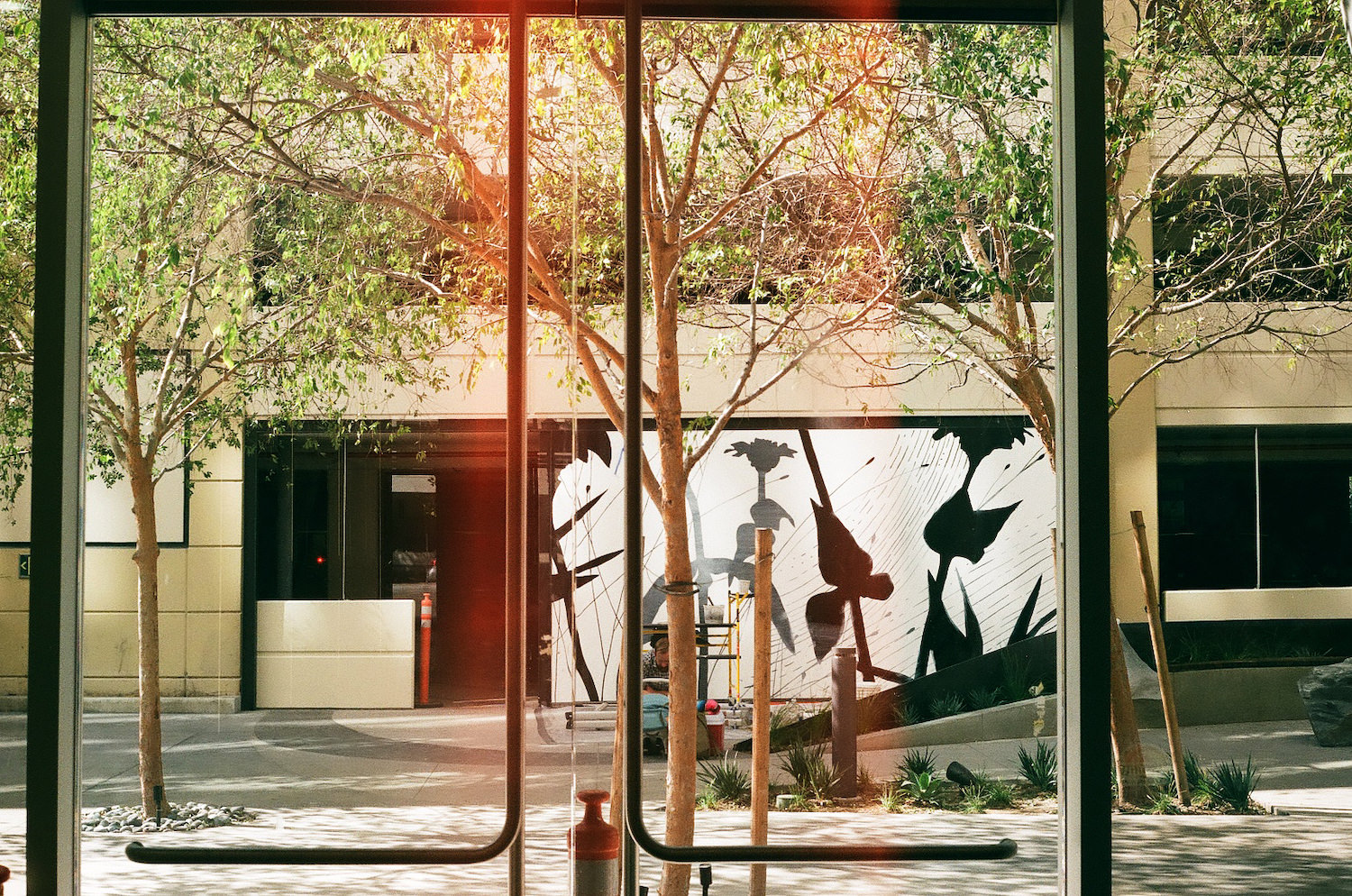 Did you have an idea what your company was going to be from the very beginning?

Hennessy: That was the thing. It didn’t start with a vision.

Sofia: It started with an invitation. Honestly, if a dude hadn’t offered us a muraling job, I really don’t think we’d be muralists. Or public artists. Site-specific artists. Whatever we are.

Hennessy: I don’t think so either.

Sofia: But what happened was, we were on a street where a bunch of development was happening, so the next business over would come visit our worksite and be like, “I’ll take one.” So we basically just muraled down this one block in Sacramento. And then we were like, “We should have a logo.” We made the painted hand logo and we became LC Mural and Design. Later, we changed it to LC Studio Tutto.

What does tutto mean?

Sofia: Tutto means all or everything in Italian, it expresses our expansive idea of what we consider a canvas to be. We wanted our name to invite all kinds different opportunities in terms of media and environment. It’s a very expansive word, Tutto.

I love that. So what happened next?

Sofia: We decided we wanted to work with Whole Foods for some reason, and we went out for that.

Sofia: It seemed legit to us. Yeah. So we did Whole Foods. Our vision has always been to bring a sense of nature and softness, beauty and warmth, sense of handmade into either really sterile spaces, because they’re brand new, or really like old and forgotten spaces. Throughout our whole path, we’ve always kind of alternated between those types of spaces. We’ll do a really fancy new space to add some life, and then we’ll do a really shitty freeway space.

What makes you good partners?

Hennessy: Partly it’s that we grew up working together. It’s very fluid. We’ve developed as people together, and we have a shared aesthetic to a certain degree. We usually agree on what looks good and what doesn’t look good.

At the same time, we have very different sensibilities. Very different personalities. I tend to like to do detailed illustrations, while Sofia works with abstract. They’re very complimentary skills.

Sofia: We provide each other what we need to do our best work. On my own, I would be such a stress case. I’m such an “It’s the end of the world” kind of person. Like if a day goes wrong, I’m like, “I’m never doing this again.” I literally will not go back tomorrow. And Hennessy is always like, it’s gonna be okay. She wrote a song for Fiona that’s like all about, “Everything is just as it should be.”

Hennessy: And then, on my own, I probably just wouldn’t accomplish very much. I’m pretty chilled out. I don’t have that fire under my ass thing.

Sofia: She gives me confidence and calm. Which is the exact mixture that you need to perform at your best.

Hennessy: Yeah, and you get me to perform. 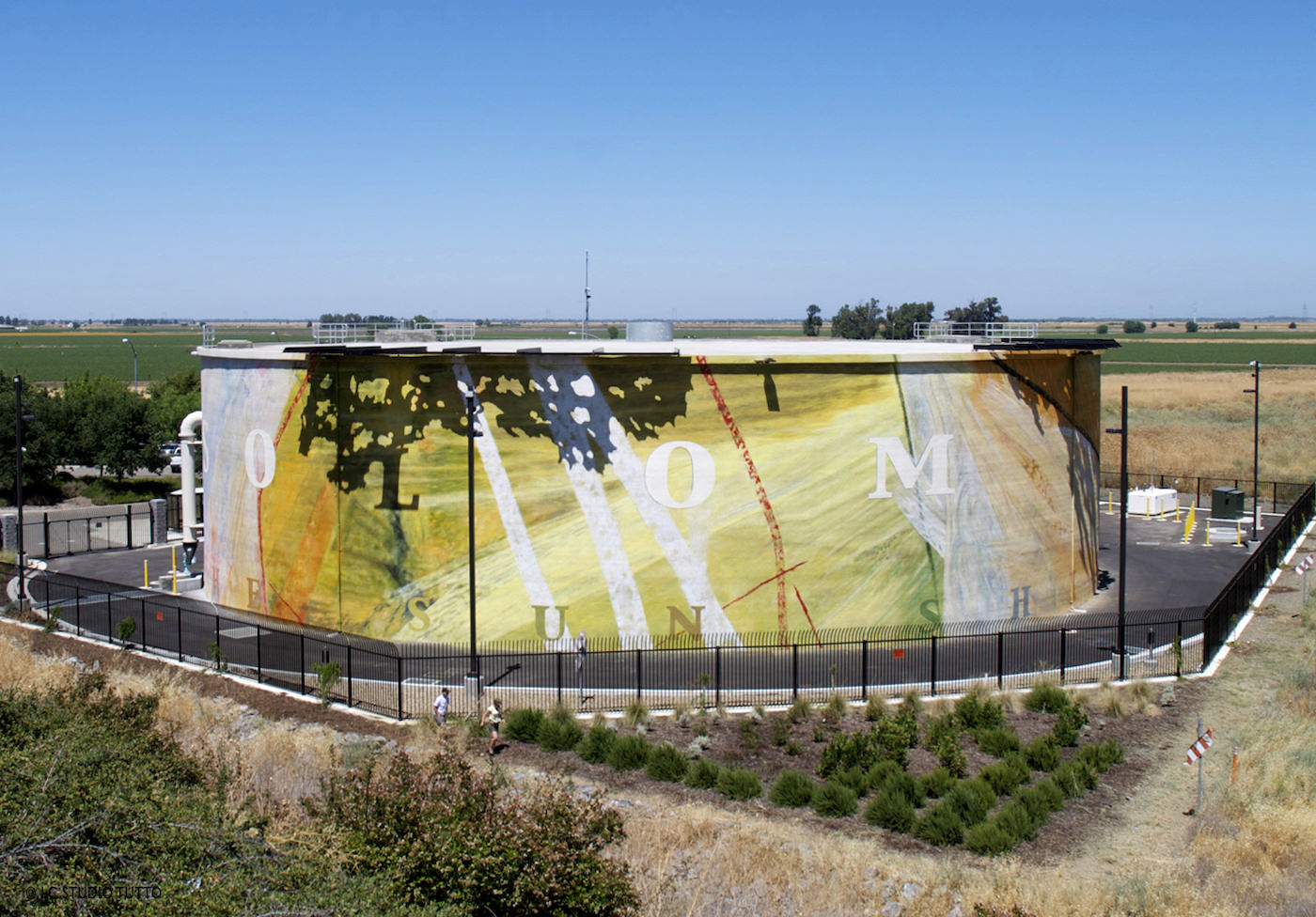 What was it like to go from painting a mural on a restaurant wall to some of the huge scale things that you’re doing now? How did you make that jump? How did you figure out how to even do that?

Hennessy: The water tower was a turning point. All we had done up that point were little restaurant murals.

Sofia: We applied for it, yeah, we thought for months and came up with that idea.

Hennessy: And we got it. We were like, “Really?”

Sofia: We would consult with practiced muralists, asking “How are we gonna do this?” And they’d be like, “It’s impossible. You can’t do that.”

What a cool pep talk.

Hennessy: I know. Sofia’s parents are artists and so we spent a lot of times in those early days at their photo studio, kind of working through it with them.

Sofia: And I mean, it was really just a huge leap of faith. We call it “art faith.” It’s really just this crazy belief. Like, you don’t have proof that you can do it, so you have to be like, “Well, I’m just gonna have some art faith and believe that the gods will smile upon me. The end result will make me happy. It will make me satisfied, and it will make others happy.”

How long were you painting the water tank?

Hennessy: It was six months.

Sofia: We changed seasons. We went from the hot, hot heatstroke summer to the really cold. 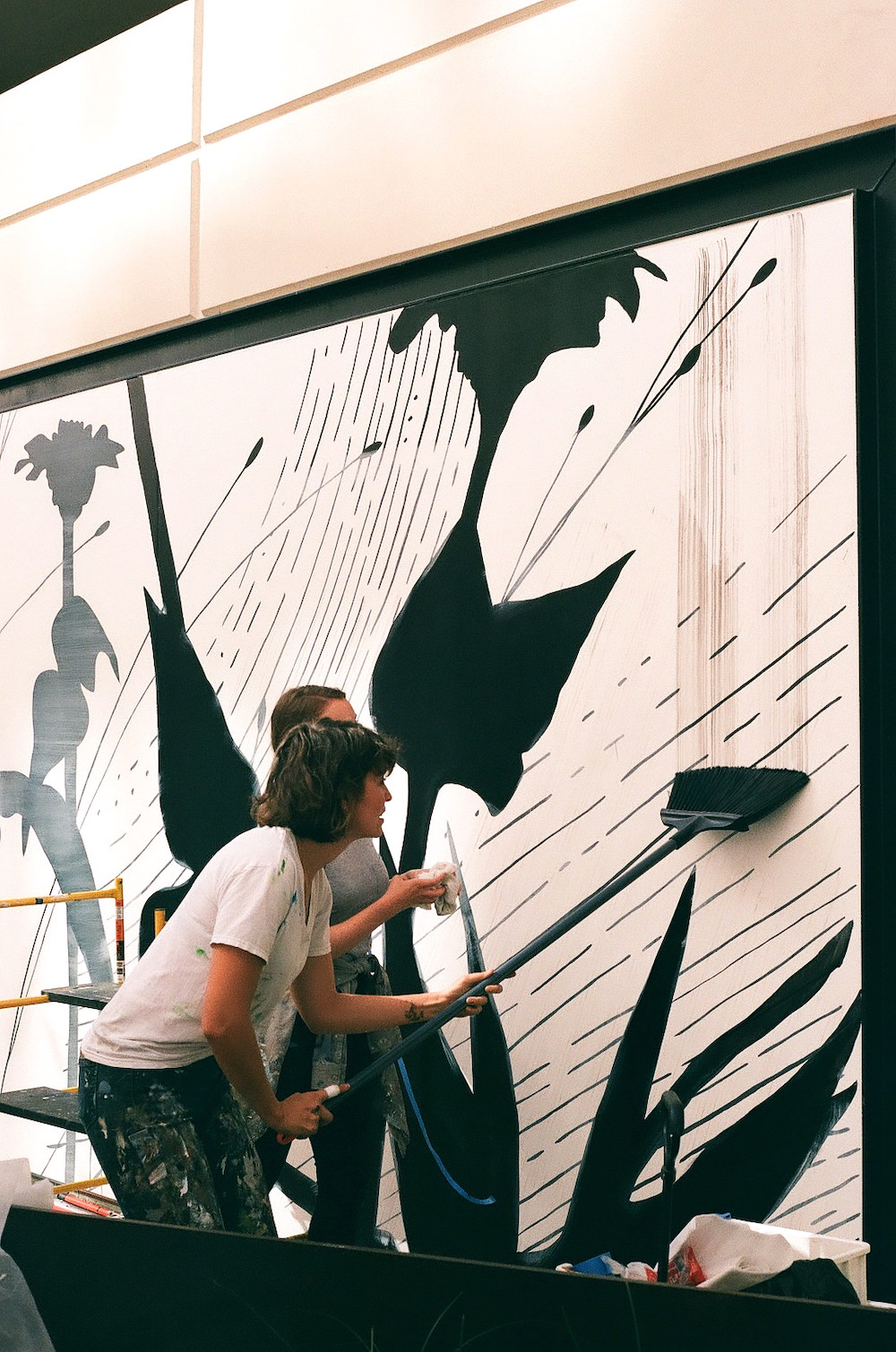 How do you deal with conflict in your partnership?

Sofia: Until I erupt, just to be clear. You’ve never erupted. I literally have never seen you erupt in my whole fucking life.

Hennessy: I feel like that makes you even more angry.

Sofia: We’ve never had a really big conflict, where there’s like a huge ideological rift. They’re usually small conflicts, which have to just be addressed one by one and throughout the project, if it comes up. I’m trying to think of our most recent conflict.

Hennessy: Our most recent conflict was at a corporate job. After Sofia had a long day of painting. That was a hard situation, because I was pregnant and I didn’t want to go up on the swing stage. So Sofia had to work twice as hard. It was a bad situation and so there was an eruption. 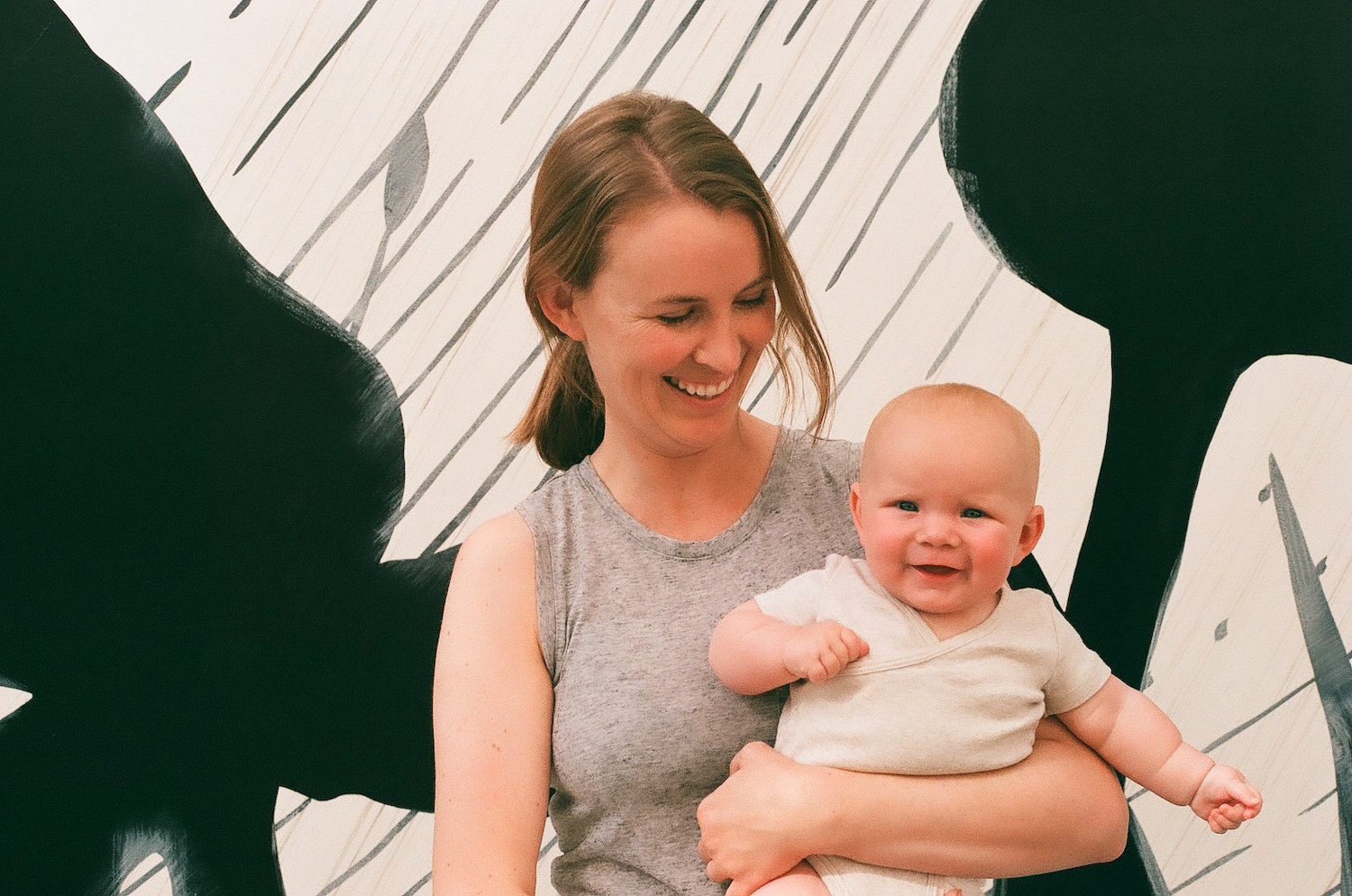 Do you have rules or parameters or kind of like an agreement between you on how you work together?

Hennessy: Well, we do have a partnership agreement that we wrote. I don’t actually even know what it says, because it was just something that we were told to do. But we realized that our relationship, our friendship, is really at the core of our business. It always has been.

In the beginning, we were just two friends playing around. There’s an understanding that that’s kind of the most important piece, is to keep that going well and going strong. It’s so much like a marriage, where the partners work together. You’ve got to make time to do things together that aren’t just work. You know? We’ll get a couples massage at the end of a project sometimes.

Sofia: When you are with a person and you put yourself in the most challenging positions you could imagine putting yourself in artistically, creatively, and physically, all at the same time, it automatically creates a pretty serious bond that you can’t really ignore. It’s ever-present. It really helps guide you through the disagreements or any kind of tension.

When I’ve done creative projects with partners, something I run into is being either the person who believes in it more, and being the pusher. Like, “We have to get this done.” I don’t know. Do you both have that belief? Is that an agreement, or are there alternate projects where one of you is the pusher?

Sofia: I think we push each other in very different ways.

Hennessy: If one of us feels strongly and the other one feels neutral, we’ll defer to the strong. But I think Sofia is the more driven, emotional one, and there been a lot of times where she’s have had more of the strong feeling than I’ve had.

Sofia: Yeah. I’m the pusher. And I think in terms of longevity, I think being a pusher is really important, but I think equally important is being like a tether-er. And that’s what Hennessy is. You’re like a tether. To the ground.

Sofia: You need a cool and a hot. You need a yin and a yang. You need the balance. Balance is so importance for longevity. That’s what we’re in it for. We’re in it for the long term. I think we both feel that way. 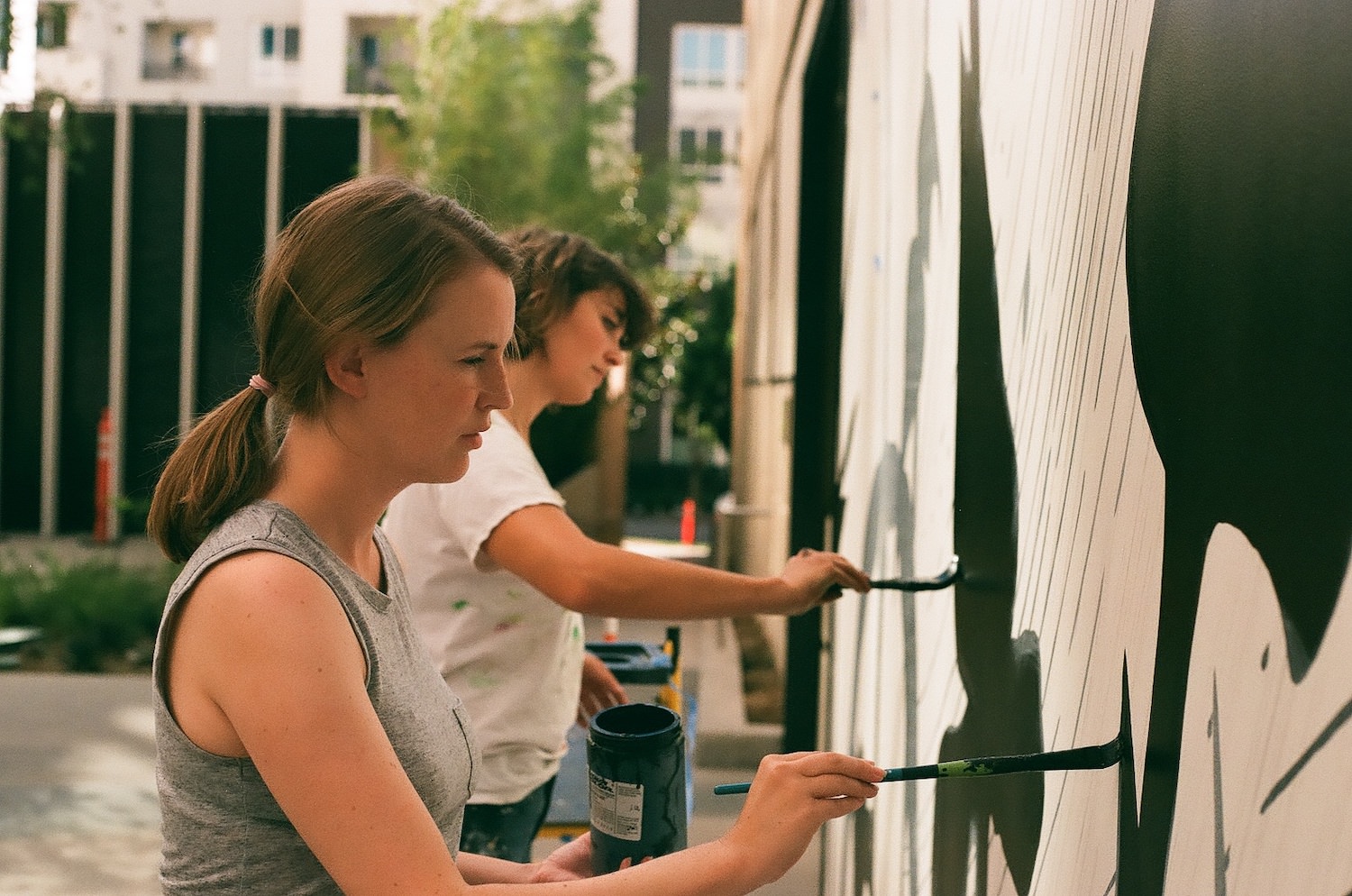 What advice would you give to friends going into a creative partnership?

Sofia: Focus on listening rather than being right. That’s a really important thing for any relationship, I think. This is all advice where I feel like it should be boomerang advice. You know? ‘Cause it’s hard to do.

I write with my brother. I think, when you’re friends or close, it feels like there’s something more on the line. That’s wonderful and what makes it work. But it’s also a little bit scary because you want to respect that person. And you don’t want to mess with what you have.

Sofia: But then I think that the advice is to always prioritize your personal relationship over your professional relationship. Because I trust Hennessy so much, I can say that. If I thought Hennessy had whack ideas or crazy taste, I wouldn’t be like, “Yeah sure. I’ll go ahead and paint this design that I really don’t believe in.” But I don’t have to, because we’re good partners.

To Be or Not to Be an Artist