Lucy Kirk and Ruby Taylor Make It Work Together

After moving into a London flat three years ago, freelance illustrators Lucy Kirk and Ruby Taylor were hesitant when it came to the idea of sharing a workspace.

The couple, who met as former members of the Puck art collective, reasoned that they already spent a lot of time together. Sharing a studio would only complicate the relationship, they thought.

At first, they rented separate studios within the same building. From their separate rooms they’d text each updates on their work, offering critiques, encouragements, emojis. A year later, when they moved to a house in Essex, about an hour east, they each worked out of separate sheds in the garden. Once the weather dropped, they were forced to huddle around the kitchen table.

To their surprise, they discovered that working next to each other actually benefited their art - and their relationship. They motivated each other through lingering doubts, curbed procrastination, and celebrated the other’s commissions in real time, for clients that include Alexander McQueen, Google, Adidas, and Grindr. “It’s really difficult as a freelance artist to find your voice and confidence,” says Lucy, who’s 29. “But if you’ve always got someone there to bounce ideas off of, someone who’s rooting for you, it’s a lot easier.”

Working from home had its limitations though. “You’d finish work and shut your computer lid - and you’re in the same house,” says Ruby, 31, noting that by the end of the winter, cabin fever had set in.

In May, the couple took a leap they had long avoided: they rented a studio together, located about a 20-minute drive from their home.

A month later, I spoke to the couple about the transition and how it’s affected their work and relationship. 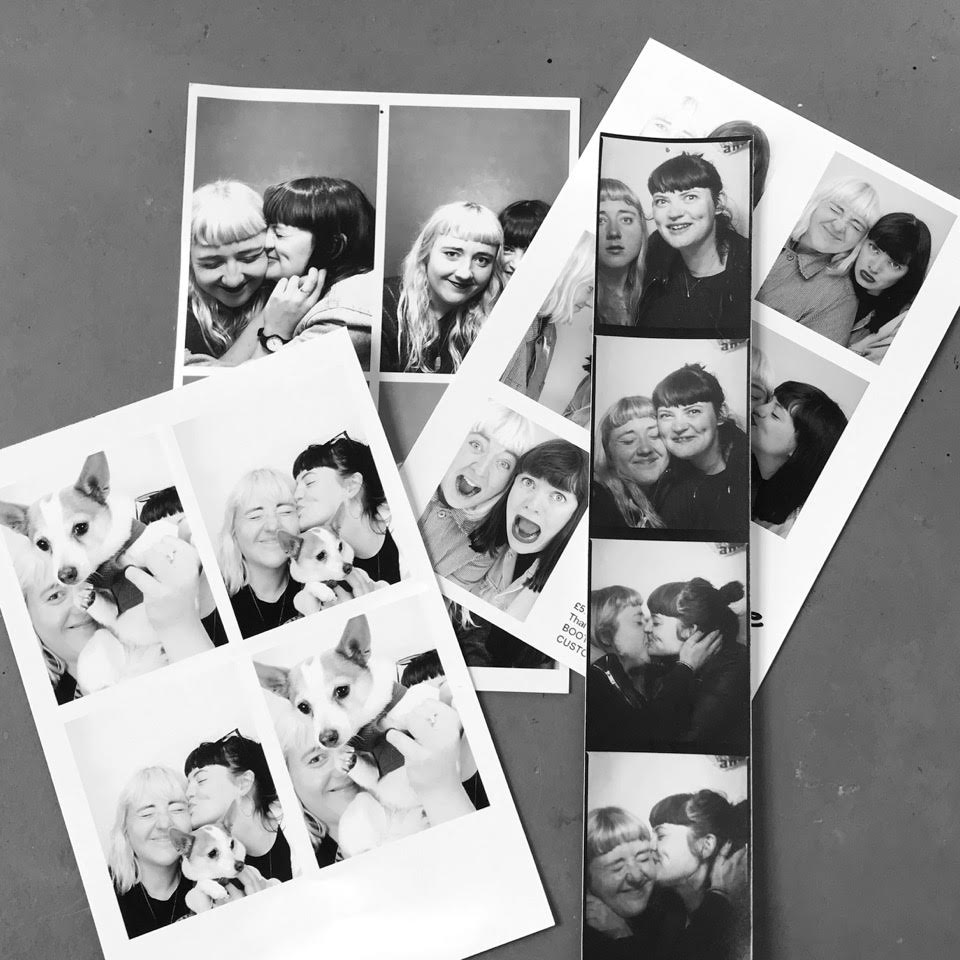 Since getting a studio outside of the house, have you noticed a difference in how you approach work?

Ruby: I feel more productive. It was so easy to feel stuck at home, especially because we’ve been fixing the house the last couple of years and I’d always be looking at some kind of dodgy painting, or something I really wanted to fix and I’d struggle not to just go and fix it. Now that we get that distance between work and home, I’m really happy to come home.

Lucy: I try to get into the studio at the same time every day. I hate mornings, so sometimes it’s really hard to stick to a nine-to-five. Ruby’s more strict, so she helps me with that.

The getting there bit is loose, but we’re good at leaving the studio. [laughter]

What have you learned about each other since sharing a space?

Ruby: Lucy is more of a hoarder. So her collection kind of edges onto my edge of the table sometimes. She does more crafts and ceramics, so there’s that stuff. She’s very into gardening. She’ll be like, “Oh, I just popped into Wilko and bought 40 thousand packets of seeds.”

Ruby: I thought the mess would be worse to be honest. I was nervous.

Lucy: Actually, I think sharing a studio has made me a lot tidier, which is good. Because when I had my own studio it was very messy.

Ruby: It was like a hoarder’s shed. You had to clear a pathway through.

Lucy: No it wasn’t! [laughter]

What’s the music situation in the studio?

Ruby: We usually have headsets on because we like to listen to different music. When the headphones come off it’s a signal, like, yeah, you can talk to me.

Lucy: Yeah, because your music taste is quite intense. It helps her work, but it makes me anxious.

Ruby: It’s not even that intense. I don’t know, I really like Jungle Pussy.

Lucy: I like her too, but not at 9 am. Ruby likes explicit strong female vocals, which is good - I’m into that - but maybe if I’m drunk, not when I’m trying to work. I’m more mellow folky.

Ruby: She listens to Velvet Underground and Lou Reed. We also listen to loads of podcasts, sometimes together. A lot of crime stuff.

Does that help with creativity?

It depends what you’re drawing I guess. Actually, I’m maxed out on murder right now. We got really into it but it’s pretty depressing. I need respite.

What do you do in the moments when the other person needs space?

Lucy: Ruby had a deadline last week and I could sense the stress. I was like, “I’m just going to go and have a walk with the dog.” And when I came back she was fine.

Ruby: Yeah, we give each other space quite a bit. I think sometimes I just need to be left alone. [laughter]

Lucy is quite up for having a chat about things. She likes to run through exactly what she’s doing throughout the day.

Lucy: Yeah that’s true. I think it’s because I hate keeping a diary but I need to get it out somewhere, so I talk to you.

How do you support each other through creative roadblocks?

Ruby: Sometimes I get jobs and I’m like, “Oh, I don’t know if I can do that,” and Lucy will say, “Of course you can, you did this other job that was like that. You’ll be fine.” And then I think “Oh, maybe I can do it.” Lucy really cares - in a good way - about what she produces, but then is really affected if it doesn’t go to plan. She takes it more personally.

Lucy: I’m not very good at finishing projects. I don’t like the finality of it. I’m really regretful. Ruby presses send on a job and never thinks about it again.

Ruby: She’s been better recently but every time Lucy approached a project she was trying to do this new amazing different thing and I’m like, “Actually, the reason they picked you is because they like your work and what you’ve already done, so don’t try to do a different thing.”

Do you think you’ve drawn influence from each other’s work?

Lucy: I didn’t use any color before I met Ruby. I didn’t know how to even think about color, and now it’s pretty colorful. I had a commission and I was like “Help!” Ruby showed me some tricks. She gets a lot of compliments for her pallets.

Her characters have a lot of personality, and that probably influenced me to give my characters a bit more of a coolness to them. I think also visually we like similar things, don’t we?

Lucy: Yeah, I think even more so at the moment. It’s funny, for one Valentine’s we made each other cards and drew the same thing on them: a black and white vase with the same flowers. But it was fictional. That was so weird.

Lucy: I had no idea how to start pricing my work. Ruby has been doing it longer than me, so I’m always asking for help with that. I think it takes a while to know how much your work is worth. Neither of us know, we’re just guessing our way through.

Ruby: It’s really hard. When you start you just need to ask someone because it’s not something you get taught in art school or anything. You’re usually always selling yourself short in the beginning. Also, Lucy is really cold over emails.

Lucy: Ruby always tries to read over my emails. She’s like, “Oh, maybe you should just ask them how they are or something?” I’m always straight to the point.

Ruby: Clients will be like, “That’s great, can you do this?” and she’s like, “Why do you need me to do that?” [laughter]

I’m like you need to pad it out a bit. Be like, “Oh great, thanks, really glad you’re happy with it so far.”

As illustrators who occupy a similar creative space, do you ever feel competitive with one another?

Lucy: Initially, I was doing a lot more ceramics, so we were doing separate things, which helps. People always ask, “How do you work together when you’re both illustrators?” But I don’t think we are ever competitive. If one of us gets a job it’s a win-win for both of us really - we can go for a nice meal or something. [laughter]

We’re always rooting for each other.

Ruby: I think we’re both competitive but it doesn’t really come out in a negative way. I don’t think we’ve ever been pitched for the same job. There’s enough work for everyone. But when we met -

Lucy: We had a competition. I forgot about that. It wasn’t really a competition but I said to Ruby, “I want to get a thousand followers on Instagram by the end of the year,” just thinking out loud, and Ruby saw it as a competition.

She ended up getting loads more, like 10 thousand that year. And I was like, why did I speak out loud? [laughter]

What advice would you give other couples who are thinking of sharing a creative space?

Ruby: Find out how you work and respect each others boundaries. If Lucy wasn’t paying attention to my cues - if she just carried on talking to me - it would be really hard to work all day. But she obviously realizes that I need to get on with it. And sometimes she’s like “You need to stop what you’re doing and help me” and then I will help her. So I think you need a bit of give and take really. And if it’s not working don’t force it. Forcing ourselves to hang out all day would be really bad.

Lucy: We spend so much time together anyway, it didn’t make a difference. Even if we were in separate studios we’d be texting anyway.

Ruby: Now we’ll be like, “Take a look at this.” And then someone has to get up and walk around the table.

Lucy: And it’s like, Ugh, just email me. [laughter]