On Episode 46 of The Process podcast, host Shannon Byrne chatted with Eric D. Johnson to talk about the slow burn of the music business and sustaining a creative career.

Eric D. Johnson formed the band Fruit Bats in 1997 and has been releasing music under that moniker since 2001. He’ll be the first to tell you that his career success has been a slow burn. He seemed genuinely bewildered as to why their name often shares space with heavy-hitter bands. He says with every year or new release, one single, project, or occurrence elevates his musical career to the next level.

Those often come down to one person putting his song on a big playlist or in a movie. Usually, it’s a single song from every album that inches his career along.

His first professional musical endeavor was playing with the esteemed group Califone at age 23. He then joined The Shins for four years, allowing him to quit his craft services job in Chicago. He cut his teeth on those experiences, receiving a true education in being a professional touring musician. Since then, Fruit Bats has released four records on Sub Pop. Their seventh record, Gold Past Life, will be released this year on Merge Records.

He credits many of his milestones to just a few moments in his life when the stars aligned for him. He met the right people at the right time who believed in him and gave him a chance despite, as Eric says, “That there was no reason to.” Humility runs strong with him. In all reality, they saw talent and a good attitude. They saw someone who wouldn’t let ego get in the way.

“It kind of comes down to one or two moments in my life and just the timing of when I was born - of being able to get going when I did. I feel lucky. And I’ve been nice and I’ve kept going. I think those are two important things,” Eric tells me.

Eric says that rationally, he should’ve quit after his first album, Echolocation, because nothing happened on it. It didn’t help that a negative Pitchfork review (when Pitchfork was sometimes mean) proclaimed it “destined for the bargain bin” (I love that album) and it saw a poorly attended tour. I think this is something the greater creator community has lost sight of: It used to be accepted that our first thing might “flop” and that you just kept trying until you got it right. Today, it feels like we’re expected to be great - or at least perceived as great - right out of the gate.

Fortunately, he didn’t quit. Eric kept working, making things, learning, refining, and figuring it all out as he went. He put in the work, he was nice to people, he showed up when and where he was supposed to. He figured it out as he went, like when he learned how to use Pro Tools from YouTube tutorials in order to write a film score. 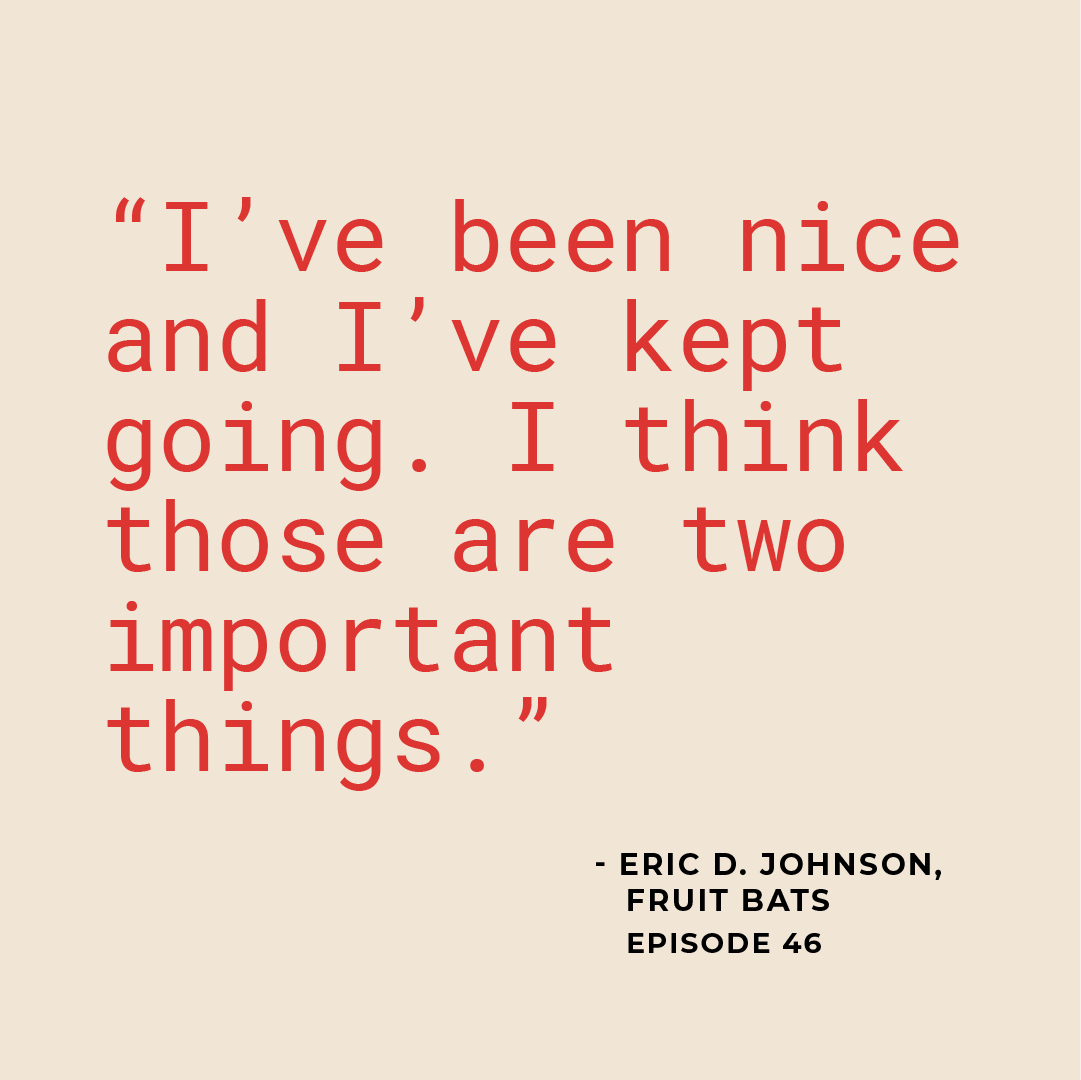 He continues to perfect his live performances, release honest music, and be kind to people. He feels that the success he has seen is partially due to when and where he was born. He doesn’t know if he’d be afforded the same opportunities today.

Eric suggests for young artists to focus on creating music they want to see in the world, not music that belongs in a commercial. If it ends up in a commercial, awesome. He also suggests playing with other, more established bands to learn how the machine works and how to record. That way, when Starbucks asks you to make a Christmas song, you can put all that profit into your next album.

We talk about how “sustainable” isn’t a sexy word, but maybe it should be. Musicians in today’s modern and digital environment are pressured to be prolific - to constantly be producing. That’s not really Eric’s style. That’s why he fills the gaps with other music-related projects such as commercial work, film scoring, producing, and co-writing. He notes, “Every possible thing you can do, I do.” This allows him to create work when he’s ready and inspired - when it feels right. It also helps that he’s remained dedicated over the past twenty years and has created a lot of work.

“In the music business, you really do get paid pennies, it’s true. But if you just make a lot of stuff,” Eric contemplates, “I’m lucky because I have a lot of music out there now from over the course of the years. It’s all stuff that in its time has had a little bit of value. My piles of pennies kind of keep me going just from having a lot of work, but I also work all the time.”

Check out my full conversation with Eric below or read the show notes. You can also listen on iTunes, Spotify, or wherever you get your podcasts.

Travis Barron Is in Motion