Bobbilee Hartman Retreats Into the Woods

No WiFi, no cell service, no computers; just a bunch of makers surrounded by nature.

That was the idea behind Lodged Out, which started in 2017 as an unplugged retreat to help people make meaningful connections without the usual technological distractions. I caught up with founder Bobbilee Hartman, to find out why this sort of event is so close to her heart.

What do people need to know about Lodged Out?

Lodged Out is a no cell reception or WiFi retreat held at summer camps and lodges in national forests around the United States. There are fireside chats at night and workshops during the day. Plenty of breaks are mixed into the agenda to allocate time for hiking and swimming in the summer and fall, and cross-country skiing and snowshoeing in the winter. Every Lodged Out retreat is unique, different from the one before and the one after. This particular magic and connection comes from the people who attend and commit to meeting new people and learning something enlightening. The demographic so far has been independent makers, creatives, and entrepreneurs. 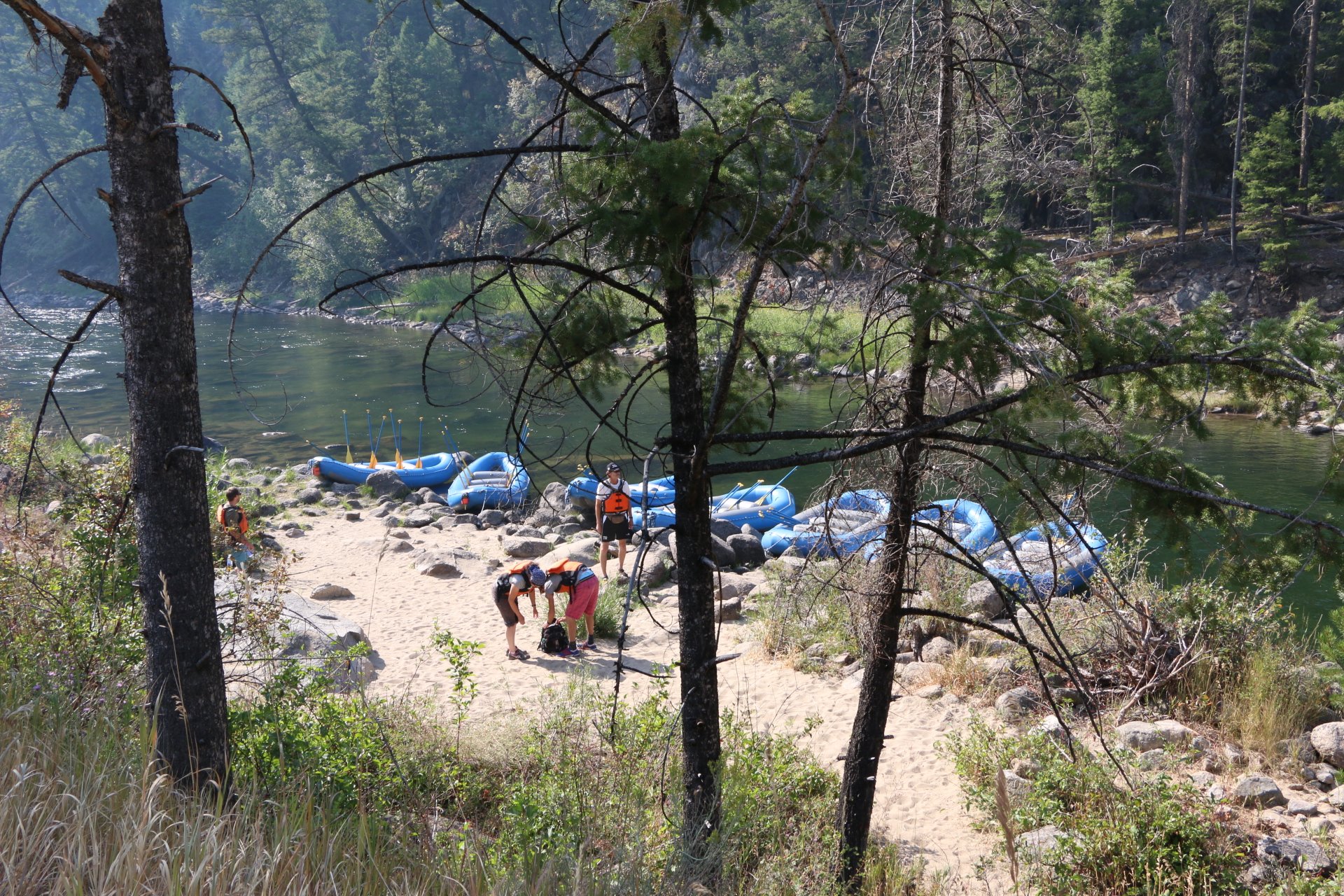 To give people some background, how’d you get started with planning events/retreats?

At the end of 2014, I came to the realization that going to tech conferences wasn’t really my jam. They are typically in big cities that make me feel anxious, and it’s always hard to find a dirt trail for an outdoorsy person like me to hike on. I had some experience in community building after planning a couple meetup group events, so I thought maybe I should start my own thing. My mind was racing with ideas: “Maybe I’ll start a workshop school or startup co-working space in the mountains. I’ll buy a ranch or old summer camp and live on it. Run it like a hostel for people who need to unplug from their phones and normal day distractions and finish side projects or MVP a business idea.”

A couple months after that, I met some folks from Australia running a series of unstructured summer camp retreats called Rails Camp, a three night long retreat/unconference for software engineers at summer camps in the mountains. They convinced me to get started on my ideas by running the US version of Rails Camp in September 2015. 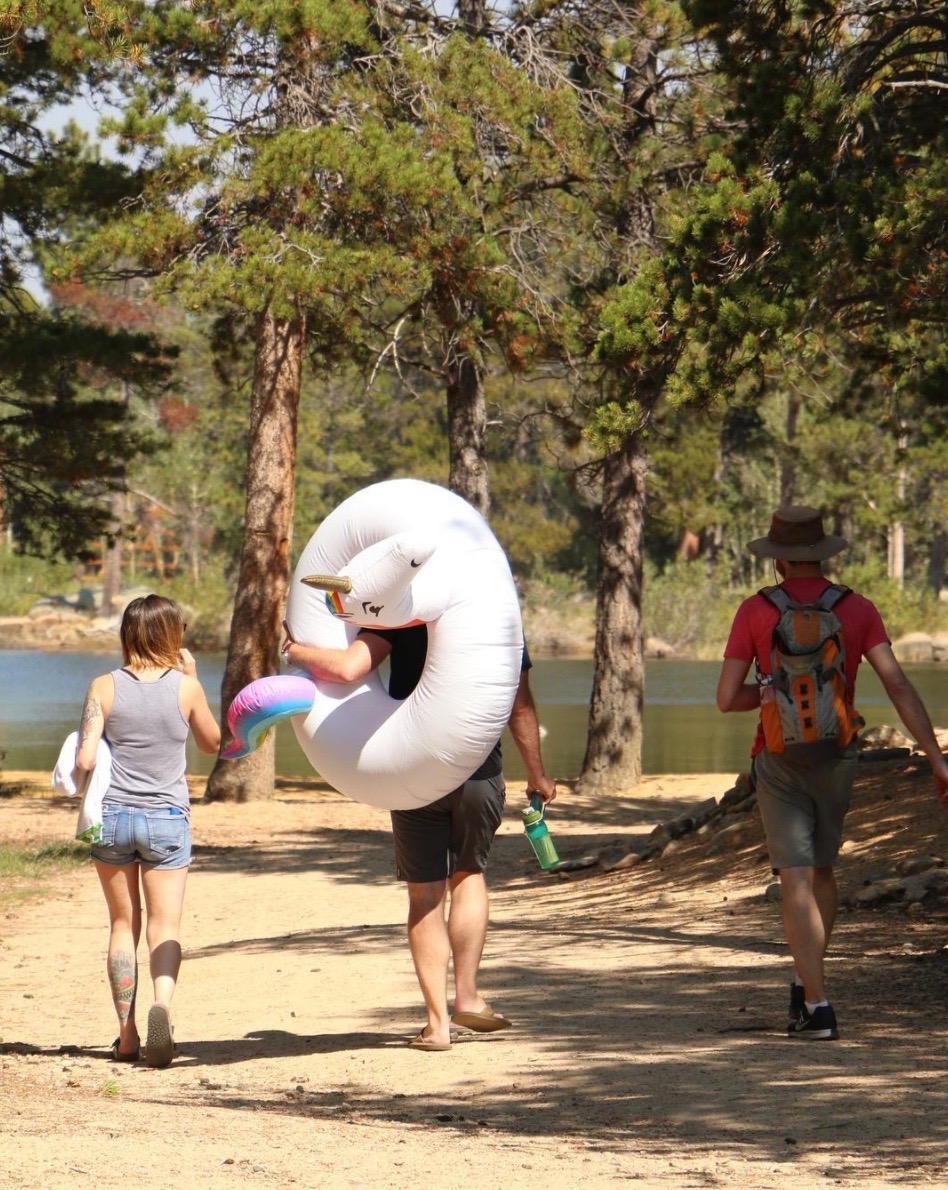 Four years later, I’m still running that event on the west coast. Registration is capped at 60-70 campers each year and the first three retreats sold out, with long waiting lists! You can learn a lot more about it here.

Lodged Out came to be in March 2017. I finally convinced myself I was ready to start my own series from scratch that is closer to my original idea back in 2014. I took many phone calls with my dear friend, Suzan Bond, who’s a life/career coach. I could finally sense she was done talking about it and wanted me to get started. “What the hell are you waiting for? You know exactly what you’re doing. No more excuses, just try this.” Honestly a few minutes after that call I made pretty fast moves. I finished the website, chose the first theme (Female Makers) and called my favorite venue that night. Lodged Out’s first event was in September 2017. Amazing, amazing people showed up to the first event. It’s been truly life changing ever since.

Why did you settle on unplugged retreats?

My biggest pet peeve is friends on their phones at dinner or when we’re talking or hanging out, but that’s not the only reason all of my events are unplugged. We all need more silence, and the impact that being unplugged has on our creativity and ability to connect with people in conversation is beautiful. You’ll feel it at my retreats and I can see the impact when people leave. The workshops and speakers at Lodged Out are fun and inspiring, but the real bread and butter of what I’m curating is a space for people to relax, connect with people authentically, share stories and to see where their creativity can bloom when it has more space to think. And of course, we can really soak in the breathtaking beauty of the mountains, lakes and forest surrounding us.

Here are some of my favorite survey responses to this question post camp, “Did you notice the difference it made on your experience to be unplugged? If so, explain…”

“It really made me open my mind to everything being less urgent than it feels. We need to take time for ourselves to live! We need to take time to be outdoors, to hang out with friends and to meet new people. Not having a phone didn’t even phase me, if anything it made me want to put it down more.”

“YES! I’m generally glued to my iPhone, so this was a big change for me. I noticed that I had a better attention span, that my conversations were so much more interesting (the lulls in convo couldn’t be padded by picking up your phone), and I was more engaged in every activity. I also liked that we couldn’t look up other people — you got to know people on a very genuine level, rather than by what their IG or LinkedIn looked like/how many followers they had.” 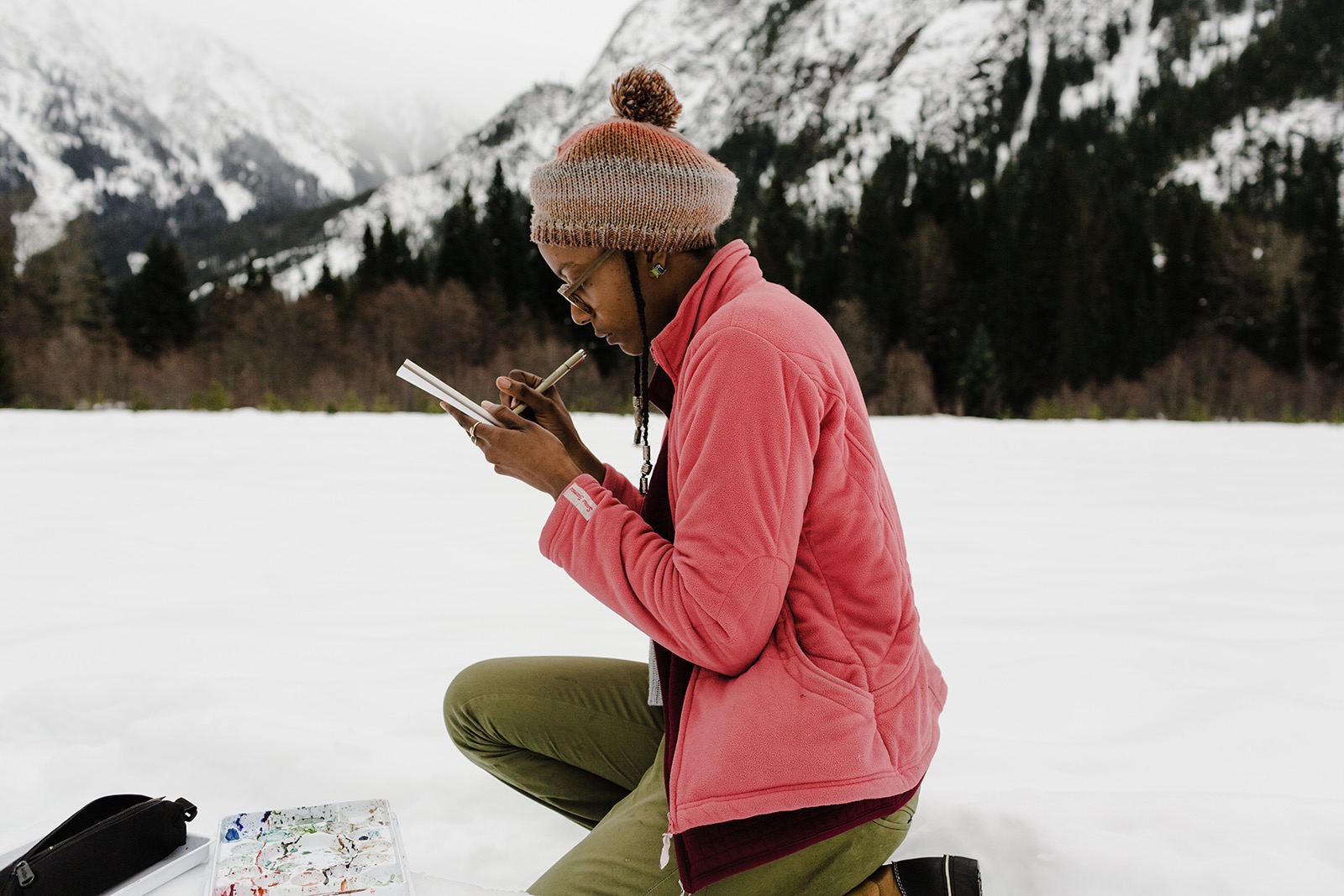 So you started with Rails Camp for the tech crowd. Why’d you make the move to a group of makers with Lodged Out?

I read an article a few months before choosing the theme for Lodged Out #1 about a quilt maker becoming friends with a famous modern architect. A few months after they met, all of a sudden they started created this amazing line of modern quilts! That story stuck with me and really inspired me. So I think this had a lot to do with why I wanted to bring people together from different ‘maker’ backgrounds to potentially collaborate on something.

Also, as I’m sure you know, folks who make things by hand are more than ever hard to find. So I wanted to bring inspiring makers together to see what they would make together. Experiential learning will always be a piece of Lodged Out, but it’s for more than just makers and the camps haven’t been themed since the first event.

Do you feel like you’ve found your people with Lodged Out? I want to know what sparks and satisfies your creativity.

I gain a lot of creativity from talking to people in person so I love going to Creative Mornings, Ladies Get Paid and The Coven events. And being surrounded by unreal creative people at all my events. I stay in touch with people I meet at my events for years, so their work and lives are what inspires me!

What’s your dream location for a future retreat?

What is another event or retreat series that inspires you?

I am really excited for what Wylder Goods is up to with their next collaboration event with the Salmon Sisters. 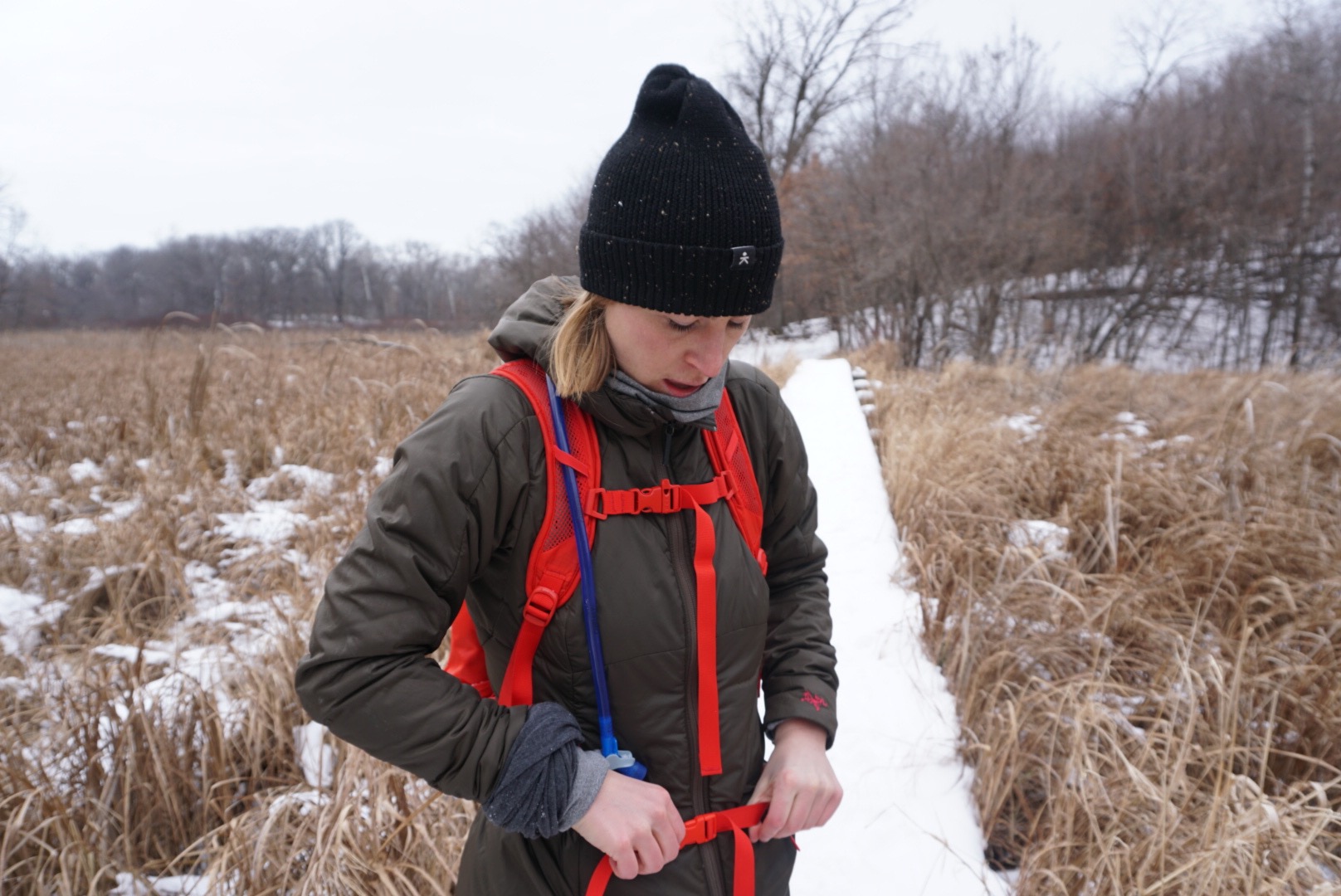 Photo of Bobbilee by Natalie Dillon

What’s been your best unplugged experience, whether at a group retreat or otherwise?

I once was stuck on Madeira Island with my ex-boyfriend in an attempt to go off the grid for a few months and WOOF. After a three-hour flight from Lisbon and five-hour sketchy bus ride through the mountains we got to the farm. After a few minutes we realized it was not an organic farm it was a very small family garden. The owners only spoke German, not Portuguese, so we were really SOL. We somehow communicated that we were not going to stay for the next two months and we needed a ride back to town as soon as possible. The buses had stopped for the day and we were literally in the middle of nowhere. They got their neighbor to drive us into town going about 100 miles per hour around their skinny mountain roads and basically dropped us off at a random hotel on the coast.

We had no plan, my credit card stopped working, the hotel was full for the night, and there was no wifi to make a plan B to get off the island. With pretty much no other option, we took a seat at the bar to laugh and digest what just happened. I’ll never forget this moment. All of a sudden we realized we were at the coolest boutique hotel. It was literally built into the cliff overlooking the North Atlantic Ocean. They had bean bags in this small grass courtyard that were filled with really friendly young travelers and locals. Long story short, a few minutes later a singer/songwriter, supposedly a famous Portuguese musician from Lisbon, played the best acoustic set I have ever heard. Ask me in person what happened after that, the story just gets better haha. Best part, still to this day, I couldn’t tell you who that musician was, what town we were in, or the name of that hotel.

You’ve been working on these retreats for a while now! What has this experience brought to your everyday life?

So many unexpected things. Something I really didn’t even think about was all of the awesome people I would meet along the way. Attendees, sponsors, venue owners and employees, small business owners and farms we source food and snacks from, and the list goes on. I have new friends across the globe now and I talk to many of them regularly.

As for what it’s brought to my day job, somewhat not a whole lot because software engineering is quite the context switch haha. But I could say:

Most importantly, running events has helped with my imposter syndrome. For the first time in a long time, I feel very confident in what I’m doing and that feeling has spilled over into many other areas of my life!

Tell me more about your career in software. Is that how you pay the bills while pouring your passion into events?

So, there’s a big update on this: I quit my job last week and my last day is this Friday. I’m able to do this now because I’ve started doing private/custom Lodged Outs for online communities, companies, artists, and instructors. I will now pay the bills from running retreats and random software contract work that piques my interest. Before this I worked on organizing retreats, teaching engineering, and my full-time software engineering career. 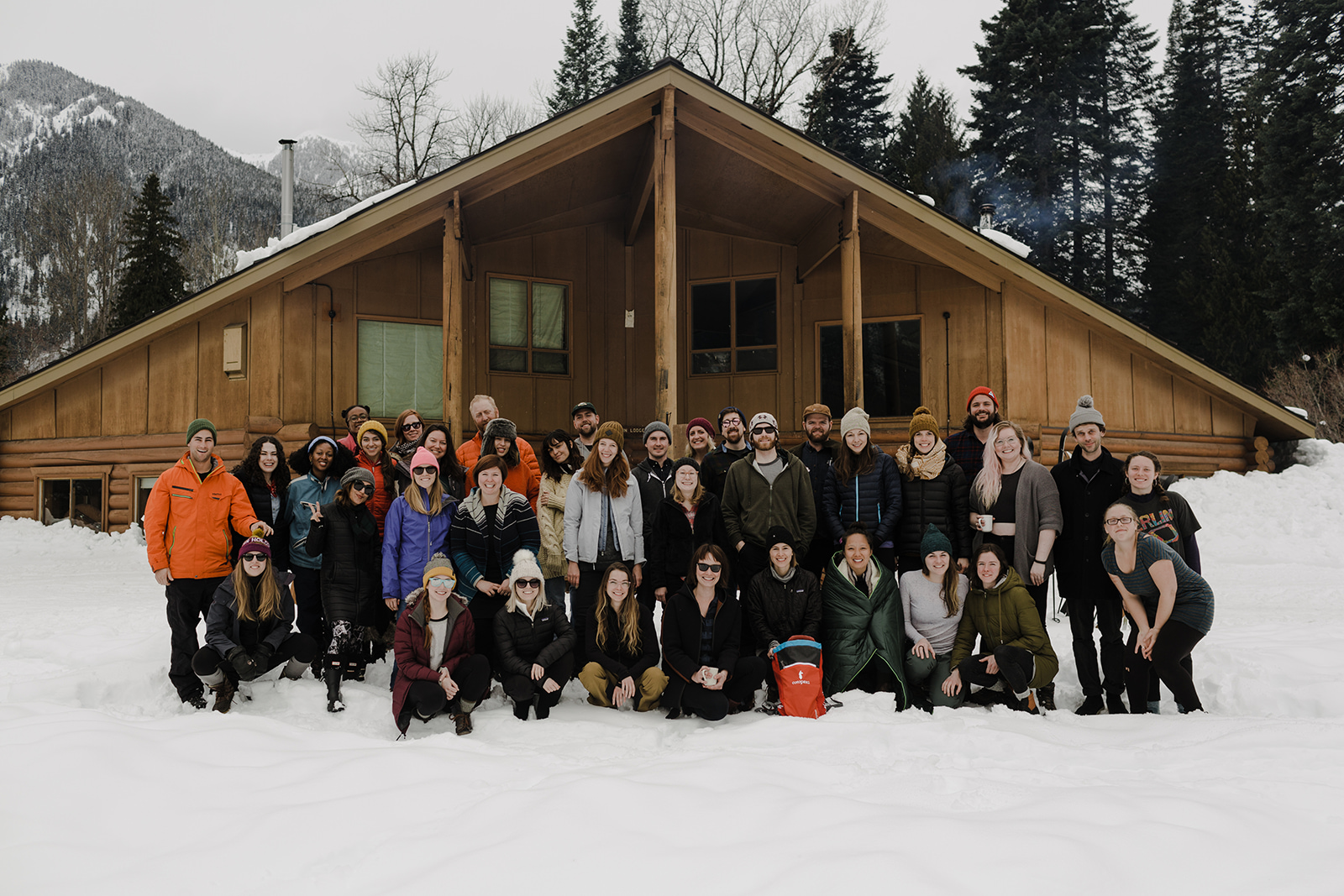 What’s next for you and Lodged Out?

Ohh boy, many things. Custom Lodged Out retreats have just been added to the site. If you’re an artist, coach, or workshop runner and you want to teach a workshop to your followers, I can plan the retreat, Lodged Out style, and you just show up to teach. Or let’s say you have a club, organization, online community, meetup group, or network and you would like a retreat to bring you all together once a year. Same thing: I plan it and you just show up with your group. If you have a team of all remote employees and you’d like to have an awesome experience for everyone to come together Lodged Out style instead of meeting in a big city with expensive hotel and restaurant bills, I can make that happen.

Lodged Out Australia is in the works, potentially in 2019, for the massive maker community there.

Bobbilee Hartman is a software engineer and event producer living in Minneapolis, Minnesota. Registration for the next Lodged Out retreat is now open.

Get a Free Pizza