Big Cartel Art Works is our initiative to provide work, opportunity, and creative freedom to artists in this time of uncertainty. As the pandemic has intersected with overdue discussions on racism and inequality, we’ll be commissioning some projects that stretch beyond our normal areas of expertise. Right now, it’s time to learn and elevate stories that we all need to hear.

We’re doing our work to understand - and undo - the harm caused by systemic racism and racist atrocities. Today, Antoinette Thomas shares a history lesson on the trauma Black people and their bodies have endured in health care.

“Black people are so strong.” When non Black people try to speak positively about the Black community, this is a phrase that comes up frequently. Yes, the idea is to highlight the resilience of a people, because overcoming hardship and being vibrant as a culture is a duality that should be praised, right?

But describing Black people as strong can be traced back to slavery: toted as a sturdy and more effective population for slave labor, this wording also doubled as an explanation to why Black people could endure such inhumane treatment. This is the narrative that helped nurture other falsehoods such as: Black people feel less pain, or that the Black body didn’t experience sensations in the same way because of said “strength.” All this leads to a lack of care in life, but also in today’s health care system.

“Super predator.” “Beast.” These are the words used to describe our children, when paired with the unstated anti-Black belief system in our country inevitably leads people to see Black bodies as lesser. Mistreatment of Black people, despite modern advances and more “liberal thinking,” hasn’t gone away. This rhetoric has made experimentation on Black persons for the “greater good” acceptable, and welcomed if for the advancement of medicine.

The Tuskegee trials for syphilis was but only one of the many atrocities the government has admitted to taking part in. Henrietta Lacks was a farmer whose cell tissue was taken while she was at the doctor’s for her cervical cancer. Without her permission or knowledge they sent her cells for testing. Not only were her cells used to find a cure for polio, but were sold off to different companies because her cells could reproduce themselves, also known as HeLa cells (named after Henrietta Lacks). Henrietta Lack’s family lived in poverty, and never saw a cent or received decent health care, even though scientists had also sampled her family trying to map out her remarkable cells. 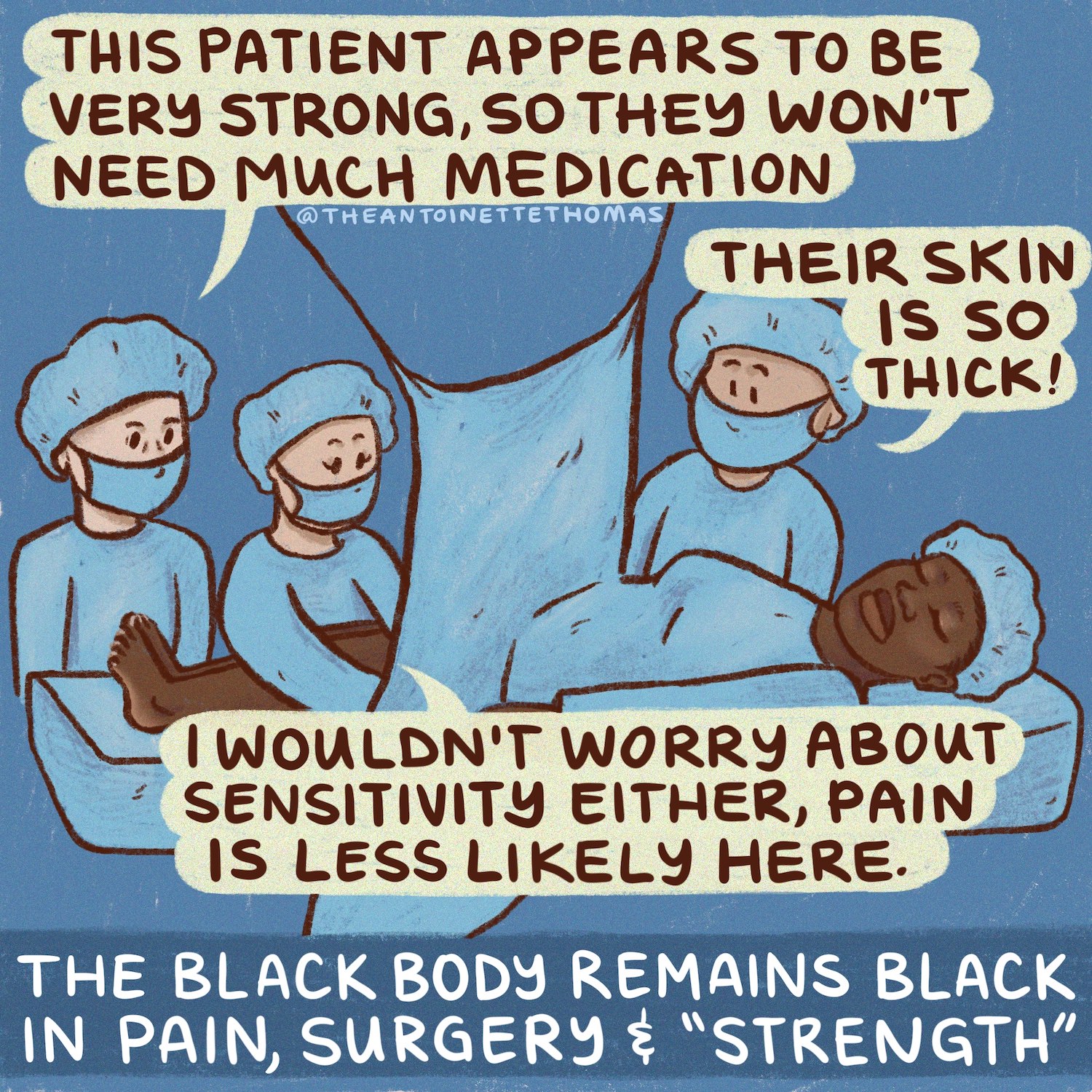 Black enslaved women were the first torture subjects to the father of modern gynecology Dr. James Marion Sims. He performed invasive surgeries that granted him a renowned career and respected title. The Black body has been used as a testing ground, pushed to and beyond its breaking point again and again. For profit, for science, and for everyone else.

Throughout history it has been OK to mistreat Black people, and culturally this belief is supported - whether by pushing stereotypes of athleticism, displaying aggressive sexually charged images, or associating us to drugs and violence. But never, critically, mentioning poverty or a larger probability of mental illness due to lack of health care. Add it all up, and the “strength” Black people display without context is seen as almost super human. It is no wonder why “Half of white medical trainees believe such myths as Black people have thicker skin or less sensitive nerve endings than white people,” as Dr. Janice A. Sabin writes. It’s already hard enough for Black people to seek medical help because of stigma and lack of resources. There are centuries worth of deep distrust in the health system. This only makes it worse.

Today, Black women have a maternal mortality rate 2.5x that of white women. Normally one can associate poor health care with socioeconomic status. I think I’ve also subconsciously subscribed to that belief, where if you pay good money, you will receive good service. It’s hammered into the minds of numerous marginalized communities that if you improve your living situation, get the well-paid job, health insurance, all is well.

So many of us were shook when Serena Williams detailed her dreadful racist treatment during pregnancy. It’s a reminder to us that there is no escape from racism, no matter how many social classes we climb, or 0s added to our check, no one is exempt.

Our dollars may be green to us, but everything we own will always be Black to them.

Multi media artist working as an illustrator. Her comic strips celebrate Black people and their bodies, experiences, and culture. Thomas focuses on representation outside of a lens of oppression and strife, while tackling issues with whimsical humor.