An Ode to Record Stores

In a previous life, before kids, health insurance, or a steady paycheck, I owned and operated an indie record shop, Slowtrain, in Salt Lake City with my husband. We peddled in CDs, vinyl, DVDs (right?!), tickets to local shows, gig posters designed and printed by local artists, headphones, t-shirts, turntables, quirky toys, books, and at one point we even had a mini-venue in our basement where we hosted exclusive and notoriously quiet shows from incredible artists like Grand Hallway, Casiotone for the Painfully Alone, Laura Gibson, and Wye Oak. 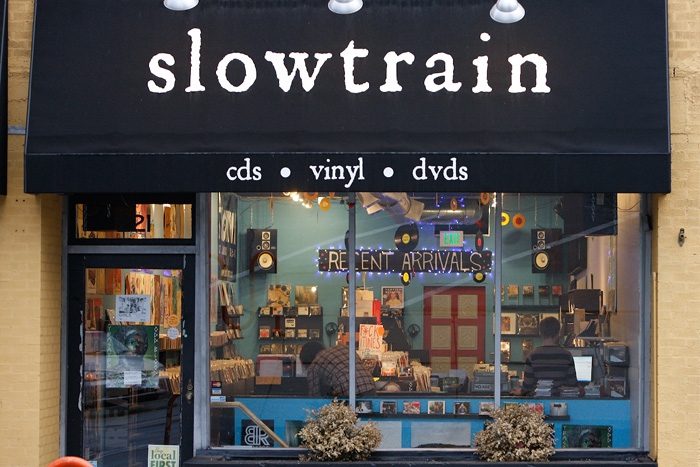 I have a massive mental archive of stories from meeting David Byrne (he knew us as “those record store people”!!!) to selling a Kanye West CD to Lou Reed (via his driver), with a mix of Pearl Jam, Bright Eyes, and Broken Social Scene in between.

This sort of namedropping is fun for parties, but what really mattered about running Slowtrain was that it was all deeply centered in community. We served as a hub for the curious and timid, a home for weirdos, a place for artistic encouragement, and sometimes you found a new album to love.

My heart still swells with pride and satisfaction listening to Salt Lake locals like Band of Annuals, David Williams, and Desert Noises. I think fondly on the customer-turned-friend who found out from his wife that she was pregnant with their first at our first-ever Record Store Day celebration in 2008 (that kid will be 13 this year!). My heart still breaks for the customer whose sister, after his early and unexpected death, asked us to be at his wake as guests of the family because our store meant so much to him. I can’t listen to Black Sheep Boy without thinking of the shopper who first heard, and subsequently loved, the album when she asked me for a recommendation to match the mood of just finding out her little brother would be deployed to Iraq. And perhaps most importantly, I’m grateful daily for the best friends we met by way of this store where we simply sold music to folks with a little extra cash to burn and a passion for independent art. Slowtrain truly changed my life. 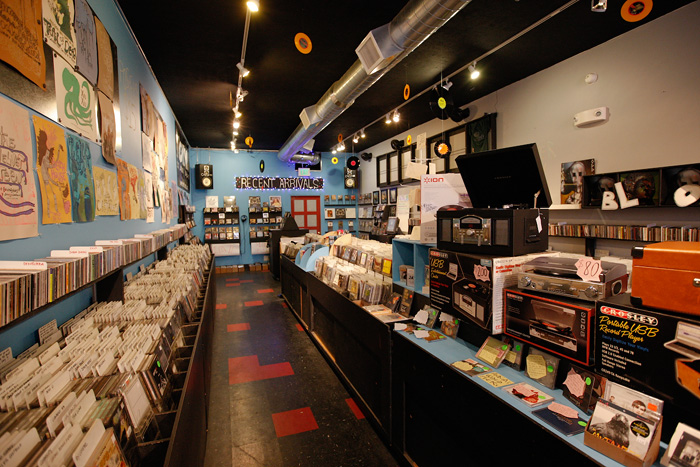 But my record store story doesn’t begin and end with my own business venture. Because before Slowtrain there was Stinkweeds, the record shop that inspired my early 20s, brought me joy, and made me feel seen. The record shop where I spent my tiny disposable income every other Friday, where I bought tickets to shows, where I first saw Okkervil River play on a small stage and felt my sense of music change forever. The record shop where clerks were (and still are! Hi Lindsay and Dario!) kind and non-judgemental, and where the owner, Kimber, taught me the importance of spending my dollars locally and with independent creators.

These days, thanks to Covid, my record shopping is done online, but still from independent record shops that are dear to my LP-loving heart. I buy new releases from Landlocked in Bloomington, limited edition LPs from End of an Ear in Austin, I round out my collection with favorites from CD Central in Lexington, and I get a monthly surprise via subscription from Luna in Indianapolis. These record stores aren’t really changing my life anymore, at least not in this phase of it, but I know these owners will inspire other young people in the same way Kimber inspired me. I know in one of those shops a person is being moved by the generosity of the staff, and it will matter to that customer more than anyone may ever know. I know memories are being made by young families and their kiddos as they grow. I know someone is falling in love all over again listening to a recommendation on the wall.

We need record stores and the communities they build and the people they inspire now more than ever. I hope you’ll seek out a little shop in your neck of the woods, not just during this year’s two Record Store Days, but also on their non-national-holiday days - when shelves are being stocked, and floors are being swept, and new shows are being added to the dry-erase board. Keep these cultural centers up and running so future generations can know the power and impact of a good community record store.

How to Maintain Meaningful Connections With Your Customers